Principal Chief on the mend after Friday fall

Principal Chief Michell Hicks sustained injuries in a Friday, July 17 afternoon fall from a ladder at his home. He was approximately 11 feet high when a board he was replacing with a hammer gave way and caused the ladder that Chief Hicks was on to fall. 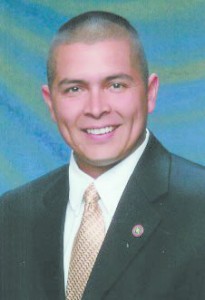 He was flown to Mission Hospital in Asheville on Friday afternoon and evaluated.

Mrs. Marsha Hicks communicated on social media the following message, “I would like to thank everyone for the prayers, calls, visits, and texts today for Michell. He has a compression fracture of the third vertebrae of his spine. He’s in a lot of pain. Please continue to remember him in your thoughts and prayers as he heals. All praise, honor and glory to God because things could be so much worse.”

Cameron Cooper, who visited the Principal Chief at Mission on Friday, stated that there was also a “bruised ankle” as a result of the fall. According to Cooper, Principal Chief Hicks was released from the hospital Friday evening.