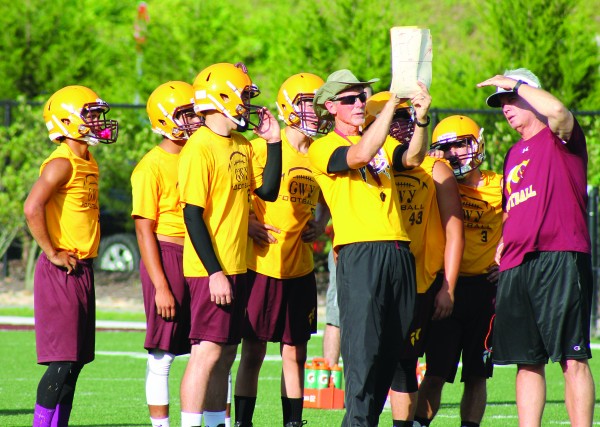 The bleachers inside of the Ray Kinsland Stadium stand barren in the hot summer heat, but only a few yards away inside the Braves Fieldhouse, a special group of young men have put in a summer’s worth of workouts to help build the team and prepare for a very promising upcoming season.

The Braves are in the midst of an exciting rebuilding phase with a promising crop of young talent moving up through the ranks.  Although the team finished with a 3-8 record in 2014, the record didn’t accurately portray the strides the team had made from previous seasons.

“Realistically, we’re going to be a talented team but a young team,” Coach Briggs said.  “Anytime you have young players, even though their talent level is very competitive, you’re also going against great teams with football experience in this league (Smoky Mountain Conference).  At the same time, we have some great senior leadership that can help make this season exciting.  This young group will get more experience, and I see us being very competitive over the next several years.”

While the Braves will field a young team with half the players on both sides of the ball consisting of sophomores or freshmen, the team is filled with exciting prospects with high potential.  Sophomore quarterback Tye Mintz, who stepped into the starting role late in the 2014 season and passed for four touchdowns, will reunite with freshman tailback Isaiah Evans as the electric duo look to build on the foundation they laid in the JV program only a short year ago.  Returning playmaker Jason McMillan (WR/Kick returner) and Darius Blanton can be very productive in the passing game.

Junior Jay Swimmer, who has put in extra hours in the weight room over the summer, looks to help clear the running lanes along with fellow returning starters’ sophomores Byron Locust, Will Davis, and senior Malakai Ramirez.

While the team will field some talented youngsters, it would be impossible to discount the contributions from returning senior linebackers Keenan Panther and Logan Teesateskie.  The tackling duo of Panther and Teesateskie led Western North Carolina in tackles in 2014 as the tenacious tandem has flourished in a leadership role on the team along with Dawson Wilnoty.

“Our linebacker corps is the strongest part of our defense,” explained Coach Briggs.  “The defensive front will also be improved.  Last year, we played several freshmen up front and they are coming back bigger and stronger this year. Our secondary will be very inexperienced with four new starters coming from a group of talented young men.”