Several weeks ago, I wrote about the need to respect women’s sports.  This week, it seems like I’ll be parroting that column.

It bugs me to no end to see pay disparities between men and women no matter if it is in the business world or the world of professional sports.  This past week, we got to witness one of the best World Cup finals ever – men or women, it was purely awesome!  Carli’s Lloyd’s hat-trick combined with that beyond-belief goal that was past the half line was enough to make even those soccer-haters out there stand up and applaud. 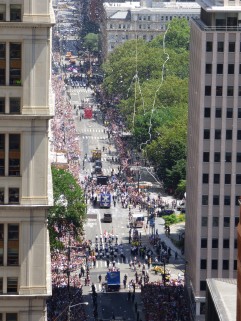 A parade in the Canyon of Heroes in Lower Manhattan, celebrating the winning of the 2015 FIFA Women’s World Cup (By MusikAnimal, Own Work)

I’m not alone in my feeling of disdain for this system.  Congresswoman Carolyn B. Maloney (D-NY) wrote a letter to FIFA President Joseph S. Blatter in which she said, “This year’s World Cup proved that women playing soccer can inspire a country and bring a crowd to its feet just as men can.  But, women will never achieve equality in the sport if FIFA itself discriminates against them.”

She went on to write, “This form of discrimination is as old as time, but it does not have to continue.  We have heard the excuses for centuries, but the time has come for change.”

This disparity is not limited to soccer.

Following the rise of Shoni Schimmel, thousands of girls across Indian Country are now dreaming of a career in the WNBA.  That career could be very rewarding and the fulfillment of a lifetime goal, but it would put a mere piddling in their pockets compared to their NBA counterparts.

Forbes.com reported earlier this year that the average salary for NBA players in the 2013-14 season was $4.9 million.  ESPN.com has reported that All-Star Kobe Bryant is set to make $25 million alone in the 2015-16 season.

At that rate of pay, a woman would have to play 46 seasons in the WNBA to earn as much as a man playing one season in the NBA.

These disparities have got to change.