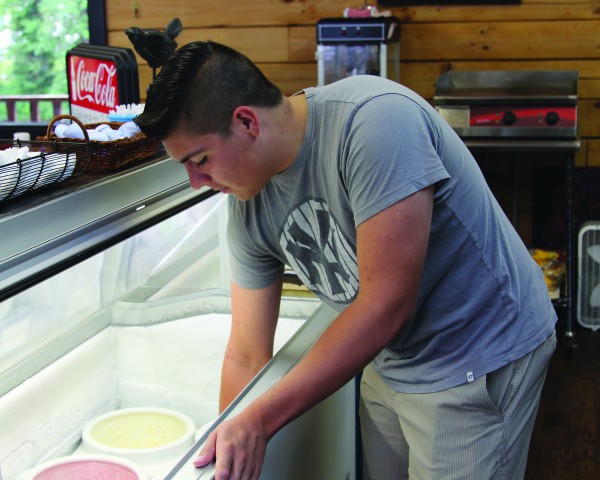 Tagan Crowe’s Two Crowes Ice Cream celebrated its first anniversary in the Cherokee Cultural District over the Fourth of July weekend.  Crowe is the 19-year-old son of Radonna and Peanut Crowe from the Big Y community in Cherokee and began his entrepreneurial career after investing his EBCI Minor’s Fund Distribution towards opening the ice cream shop.

“My sister and I put our money together and decided we wanted to open a business,” said Crowe.  “We did it last year (2014), and it was pretty successful, so we’re going to do it again this year and hopefully for years to come.”

Two Crowe’s Ice Cream began when Tagan, along with his sister Madison Crowe, leased the space across from the Qualla Arts and Crafts Mutual.  The previous attendant had previously sold ice cream, and with the ice cream equipment already in place, the two took control of the operation.  After a few calls to Hershey’s Ice Cream, the type sold in the shop, the business opened on the Fourth of July weekend in 2014.

“It was a pretty easy start-up business and kind of a turn-key thing, so we kept it,” explained Crowe.  “Now we’re trying to branch off and do a little bit of food service with it, but we’re not where we want to be yet.  We want to expand, but we want the ice cream shop to be as good as it can be first.”

“We have actually bought an ice cream bike; we’re just waiting for it to get here.  Our plan is to be peddling around downtown selling ice cream.”

Two Crowe’s Ice Cream currently has seven employees from the Cherokee community.  Owning and managing a business at the age of 19 may seem like a daunting task, but Crowe shares how he has taken on a leadership role.

“Sometimes you have to be kind of strict with your workers,” he said.  “You can’t be hateful, but you can get aggravated really easy.  You have to learn how to tone it down and say things in a way that makes sense to your employees.  There’s a lot of paperwork, but it’s nothing you can’t handle.”

Crowe is currently a freshman at Western Carolina University.  He attributes that his ability to transfer his life skills and knowledge into the business was through the education he is currently receiving.

“Education taught me a lot as far as how to keep up with receipts for taxes, spreadsheets, and scheduling.  I wouldn’t have known that if I hadn’t gone to college.  It (education) was extremely helpful.”

When asked what advice he would like to pass along to Tribal members who may be receiving their Minor’s Fund Distribution, Crowe said, “Make sure you’re going to feel comfortable with the decisions you make.  Don’t be afraid to ask anybody for help along the way, whether you’re going to invest in stocks, mutual funds, or even starting your own business.  Make sure you go to people you trust and are going to give you the truth.  Be aware that you’re probably not going to know everything.  Save more than you spend.”