I do not like to dogpile on an issue, but I’ll make an exception this week.  Sports Illustrated’s Andy Benoit tweeted “women’s sports in general not worth watching” on June 22.  I not only completely disagree with Benoit, but I must ask what sports is he watching?

In all fairness, before I go further, I must report that the day after that tweet, Benoit did apologize, “My sincere apologies for last night’s senseless tweets.  I got carried away responding to playful ribbing…and, in my stupidity, overcompensated by saying something ignorant and extreme.  100% mistake on my part, for which I’m deeply sorry.” 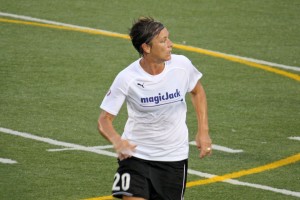 Benoit’s comments came during the Women’s World Cup in Vancouver, Canada.  I have watched just about every match televised from the group stage on, and I must say I’ve been impressed with the level of play.  In fact, I made the comment to my wife in the first one we watched that I was enjoying it a lot more than the Men’s World Cup because the women didn’t flop and fake injuries as much as the men.  The level of play and competition was refreshing.

I am a true fan of sports. Gender doesn’t have anything to do with me wanting to or not wanting to watch a sport.  I only care about the game itself and the competitiveness and drive of the athletes, and that goes for anything from pee wees to pros.

In a previous column, I discussed the link between sports and academic achievement.  Female high school athletes especially benefit from sports participation.  According to the Women’s Sports Foundation, female athletes are 92 percent less likely to get involved in drugs and three times more likely to graduate than their non-athlete counterparts.

To say that women’s sports aren’t worth watching means that you aren’t giving it a try and that’s unfair.  Women work just as hard as the men in training.  They play just as hard, sometimes harder, as men.  In short, they deserve the same respect as men, maybe more.

When I hear someone say, “Oh, they’re just girls” or “they play like a bunch of girls”, I think of professional athletes like Billie Jean King, Shoni Schimmel, Serena Williams, and Abby Wambach (U.S. Women’s Soccer team), and if playing like a girl means working every day to achieve greatness in your sport, then count me in.  I want to play like a girl too.

“I will be at Kentucky,” said John Calipari, Kentucky men’s basketball head coach, in denying rumors he might be making a change to the NBA’s Sacramento Kings.