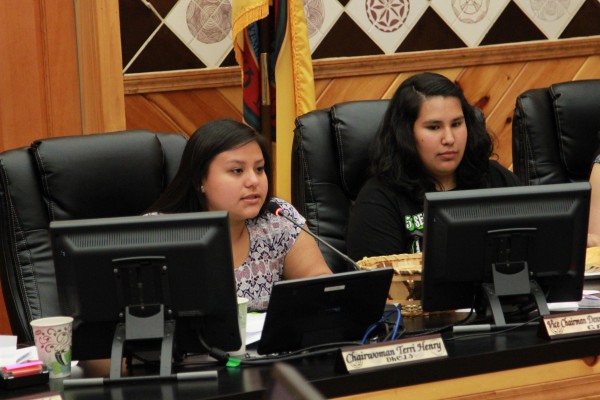 Taylor Nelson and Lou Montelongo, both members of the Junaluska Leadership Council, are shown at the Meet the Candidates event for Vice Chief candidates on Monday, May 18 at the Tribal Council Chambers. (AMBLE SMOKER/One Feather photos)

During the month of May, the Junaluska Leadership Council (JLC) hosted several candidate forums for the elected offices that will be the focus of a primary on June 4. The forums were televised on Channel 28 and received coverage in the One Feather. Most of the candidates were able to participate. The youth who make up the Council organized the format and selected the standard questions that were asked of each candidate and the random questions that were asked of randomly-selected candidates.

The JLC members were very professional in their execution of the forums, and the format provided each candidate an opportunity to share their autobiography, platforms and insights on issues that are of importance to the Cherokee community.

The questions were relevant and, at times, pointed. They dealt with current issues, concerns and the future of the Eastern Band of Cherokee Indians. Being televised, the voters had the opportunity to see how candidates presented in a format in which government leaders typically find themselves.

One of the Junaluska Leadership Council’s advisors concluded the series of forums by letting the audience know that the JLC members selected the format and questions on their own with no influence by their adult advisors. I think this tells us that our youth are capable of great decisions when given the proper information and training.

One of the questions that the JLC asked candidates was, “What are your thoughts about staggered payments of the Minor’s Fund distribution?”  There were various answers to the question from the candidates. The question typically brought references to age or maturity. We should keep in mind that there are many adults who receive large sums of money that make unwise decisions with their funds. Bad decisions have very little to do with physical age. As we have seen with the Junaluska Leadership Council, young people who are given the necessary education and support can make very good decisions.

I want to thank the Junaluska Leadership Council for the insightful look into the candidates running for Principal Chief, Vice Chief, Tribal Council and School Board. I know that you put much thought, time and effort into your forums for the benefit of the community. The Tribe greatly appreciates your work.  Also, I am sure that the JLC would tell you to get out and make your voice heard on June 4 through voting in the Eastern Band of Cherokee Indians Primary Election. Every vote counts.