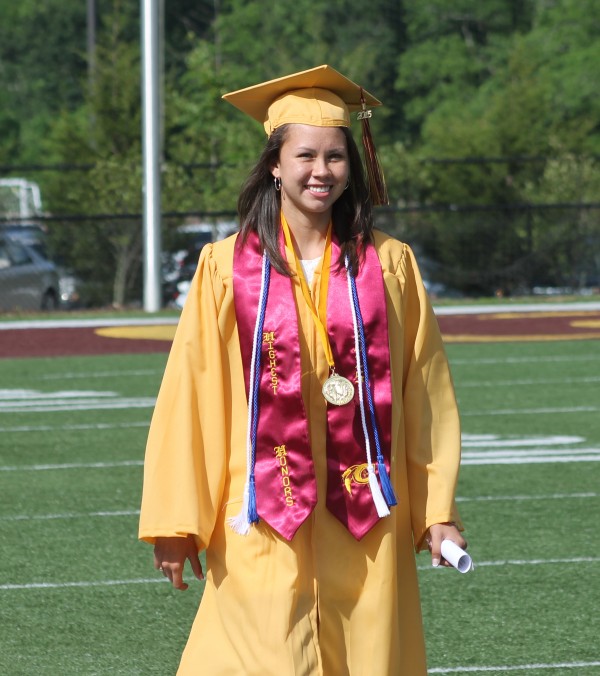 With the class motto of, “I can’t change the direction of the wind, but I can adjust my sails to always reach my destination,” the Cherokee High School Class of 2015 graduated on Saturday, May 31.  A total of 57 students crossed the stage to receive their diplomas during the commencement ceremony held during a bright, sunny morning at Ray Kinsland Stadium.

Debora Foerst, CHS principal, praised the students for their perseverance over the years and related that 19 are heading to a four-year college or university, 18 are going to a two-year college or technical school, and two are entering the United States armed forces.  “Even though you’re leaving Cherokee High School, don’t stop living the Brave life.” 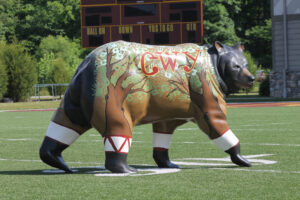 The CHS Class of 2015 decided to bring back the tradition this year of a senior gift. They painted a large statue of a bear with various symbols and presented it to the school on Saturday.

The CHS Class of 2015 decided to bring back the tradition this year of a senior gift.  They painted a large statue of a bear with various symbols and presented it to the school on Saturday.  Olivia LaCombe, senior class president, commented, “The legs of this bear represents the four pillars of the Sacred Path – responsibility, respectfulness, truthfulness and caring.  The trees represent the growing future.  The leaves, being green, represent life and a way of leaving a piece of us behind.  We wanted to make this bear because we saw a chance to do one last thing together – as kids and as family.” 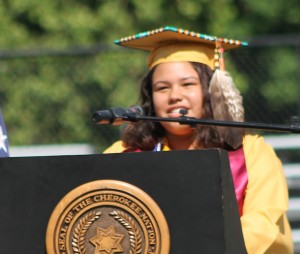 Salutatorian Kristan Lacey Arch said during her address, “Most of us have known each other since elementary school.  Because of our history together, we are more than just classmates.”

“A couple of years ago, we didn’t think this day would ever come.  But, today is the day that we leave behind our childhood and take that next step toward our future.”

Valedictorian Kendall Toineeta spoke of the Class of 2015’s journey together and the futures that they will encounter.  “Today is a new beginning…we all have an opportunity to experience new beginnings.”

She added, “Don’t get me wrong, we will have our successes and our failures, but with the failures, we must pick ourselves up, remember how far we’ve come and continue on our journey.”

During the event, several awards were given out.  The NAIWA Award, presented by Cherokee Chapter member Lucille Wolfe, was given to Kendall Toineeta and Kristan Lacey Arch, and the American Legion Award, presented by Post 143 Commander Lew Harding, was presented to Christina Owle.

Natalie Welch, CHS Class of 2005, gave the commencement address.  “For the longest time, I was obsessed with the idea of achieving ultimate success, but my first mistake was replacing success with perfection.  Perfection is an illusion.”

Welch, who is employed at Wieden+Kennedy advertising agency in Portland, Ore., went on to say, “The biggest thing I want to tell you guys about success is that it is not something that you can let someone else define for you – not your family, not your friends.”

Welch said many people mistake things like money or fame for success.  “Real success comes in living your life the way you want and finding fulfillment and happiness.  You can absolutely achieve success, but you have to do it on your own terms.”

To view or purchase photos from this event, visit: http://onefeather.smugmug.com/2015-Community-Events-and-News/Cherokee-High-School/