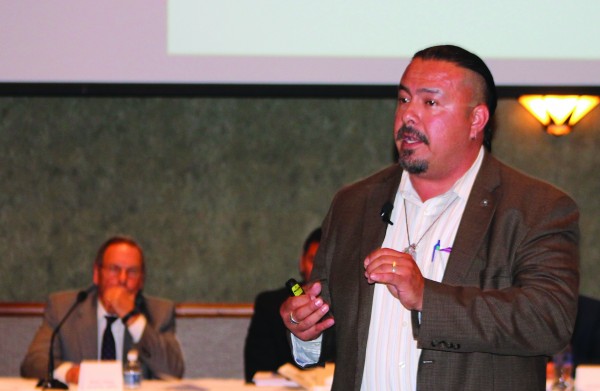 Tribal corporate structures were the topic of discussion at a Summit hosted by the EBCI Division of Commerce on Tuesday, May 26.  Held in the Locust Room at Harrah’s Cherokee Casino Resort, the afternoon-long event featured panelists from throughout Indian Country who came to share their expertise on how their tribes formed corporations.

Kenneth Stanger, a member of the Confederated Tribes of the Colville Reservation, is the owner of Sovereign Development Corporation.  He spoke on the various ways that tribes can form corporations including Section 17 corporate charters and tribally-chartered corporations.

“The purpose of implementing a tribal corporation is, first and foremost, to protect the tribe,” he said adding that tribal members are always the shareholders in these types of organizations.

Stanger gave some pros and cons to a Section 17 charter as follows:

He added, “When tribal funds, resources, and business interests serve the entire tribe, they can act as a catalyst for individual tribal member businesses as well.”

Stanger said the time factor can many times be very important.  “Business has a season, and if you don’t respond within that season, business has a quiet way of going somewhere else.”

Nimmo described how the Chickasaw formed their corporation through Section 503 of the Oklahoma Indian Welfare Act – a piece of legislation that he said is equivalent to Section 17 of the federal Indian Reorganization Act.  “We recognized early on that we needed to diversify from gaming.”

Their first effort, Chickasaw Tool Company, failed.  “They lost some money.  They were once burned, twice shy.  We wanted to make sure the new businesses were controlled better.”

Small said the community and the tribal membership must be involved.  “Be extremely transparent in every part of the process.”

Nayquonabe Jr. said it is important that a tribal corporation be allowed to operate like a regular corporation – separate from a government structure.  “Separation is important.  Tribal government just runs at a different pace than a business runs.  Our company wants to move and we want to move fast, and that’s a big part of the separation.”

Mille Lacs Corporate Ventures reports bi-monthly to tribal members with quarterly visits to the districts on the reservation.  “Being a tribal corporation, we are accountable to all of our tribal members.”

Jamie Fullmer (Yavapai Apache), founder of the Blue Stone Strategy Group, moderated Tuesday’s panel and said several of the main points of consideration when forming a tribal corporation are board selection, separation with a sound model in place, transparency and accountability.

Hamilton spoke about the formation of Ho-Chunk, Inc., located on the Winnebago Indian Reservation in Nebraska, which includes 34 subsidiaries in various fields from construction services to furniture production.  They also own several consumer brands such as Pony Express gas and convenience stores.

“Ho-Chunk, Inc. is a tribally-chartered corporation, not a Section 17,” she said.  The Winnebagos started the business with a $9 million investment.  “Today, we have over $100 million in assets and have created over 1,300 jobs.”

Like the Chickasaws, the first business venture for the Winnebago Tribe failed.  “They looked at all the reasons the tribal corporation failed, and they tried to address some of that,” said Hamilton.

During the panel, the idea of having one broad holding company with various components (subsidiaries, LLCs, etc.) was discussed.  “The biggest reason to have a holding company is it creates some separation from the tribe, and that separation is important because you can limit the liability to the tribe,” said Small.

Warrington encouraged the Eastern Band of Cherokee Indians in the process of creating a corporation.  “I think you guys are a sleeping giant on the non-gaming stuff.  You’ve been so successful in gaming, and I’m sure you’ll be successful in other ventures as well.”

Nimmo said any business needs to be given time to grow.  “Our goal is to generate something long-term…it’s a value-creation thing.”

At the end the event, Principal Chief Michell Hicks gave some closing remarks.  “Many of us have been successful at gaming.  Now it’s time to look at how we can be successful at other ventures…we have to figure out what we’re good at or might be good at.”

He encouraged EBCI tribal members to give feedback to tribal leadership on these issues including Section 17, holding companies, etc.  “At the end of the day, it’s about getting it structured properly so everyone has a comfort level and controls are in place and the right focus is in place.”

Vice Chief Larry Blythe, in his closing statement, said Section 17 might work for another tribe such as the Alabama-Coushatta.  “We’re in a different situation here with the Eastern Band.  We’re blessed with good land, and fortunately, we’ve been able to expand our reservation.  We’ve got some parcels coming into trust that I think we can look to do some other economic development on.  So, I think we’re in a different situation.”

He added that Section 17 is “one of many opportunities” available to the Eastern Band of Cherokee.  “I just believe, with what the discussion has been today, that tribally-chartered LLCs or tribally-chartered corporations enterprise creations can do the same thing as Section 17.”