After more than 14 years of working with Cherokee farmers and gardeners, EBCI Extension Office agricultural agent Sarah McClellan-Welch is retiring as of Friday, May 29.  She came to Cherokee in 2001 from the University of Alaska where she did similar work.

“I’ve had the opportunity to do a lot of things over the past 14 ½ years,” said McClellan-Welch.  “I think the Backyard Ramp Patch Project is really my favorite thing that we did because so many people have volunteered and helped make that program.  It stemmed out of a real need.” 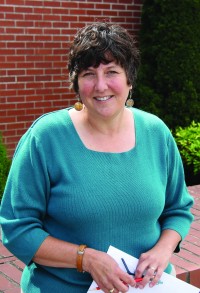 After more than 14 years of working with Cherokee farmers and gardeners, EBCI Extension Office agricultural agent Sarah McClellan-Welch is retiring as of Friday, May 29. (SCOTT MCKIE B.P./One Feather)

She said the project came about by her talking and listening to local community members.  “It came out of me listening to what other people had said about their parents having a habit of bringing ramps home and replanting them.  So, it was just a matter of formalizing that practice that people were already doing.”

McClellan-Welch said the Chief’s Family Garden Kit project is also one of her favorite projects that she was involved in.  “It involved so many people with a lot of volunteers every year.  We reach over 750 families a year, and we see the results of those garden kits during the garden judging that takes place every summer.”

“I have the satisfaction of being part of the crew that gives the seeds out, seeing those plants growing in the summer and then seeing many of those garden products coming into the (Cherokee Indian) Fair in the fall.”

She related that in 2007 she taught a Master Gardener class that was very rewarding for her.  “I only taught one, but those Master Gardeners still continue to volunteer.  They really are an amazing group.”

Another project that was dear to her heart was the Do-Yi Institute, a collaboration with New Kituwah.  “That was to provide outdoor education for children – to encourage that in the preschools as well as the elementary schools.  Science proves that children are able to learn better if they are exposed to the outdoors.  They have better behavior.”

McClellan-Welch also said that working with her husband, Kevin Welch, to develop the Center for Cherokee Plants was a project that she loved being a part of.  “Being a part of that initiative to save traditional seeds was probably the most important thing that I’ve ever been a part of, and that credit goes to Kevin…I think, in the long-run, it’ll be one of the most important things.”

Recently, she has been working with local farmers who are introducing legislation to Tribal Council to start an Agriculture Committee for the Eastern Band of Cherokee Indians.  “That is another thing that is very rewarding, and that’s going to carry on into the future for sure.  The idea behind that is to give agriculture some credibility.  Agriculture is where our food comes from…most of us buy our food from somewhere else, but there is a potential to have that food, at least a portion of the food, that we eat every day come from right here in Cherokee.”

When asked about her future plans, she laughed and commented, “I’m trying very hard to not plan.  Because I’ve been a government employee, I’ve had to plan my whole career…I’m trying really hard to make a lifestyle change and just live.”