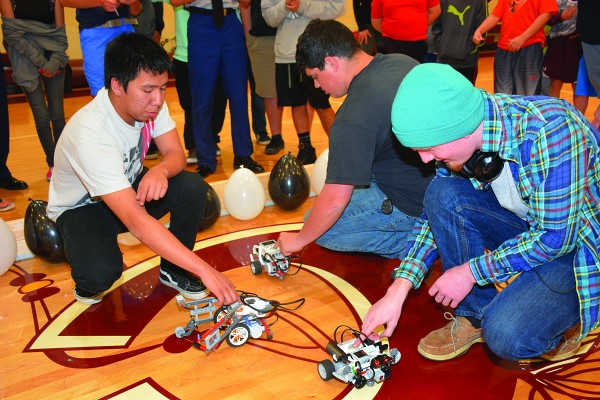 There’s nothing unusual about neighboring mountain high schools competing for supremacy inside a local gymnasium, but the competition that took place recently at Cherokee High School’s auxiliary gym wasn’t your typical interscholastic contest.

This battlefield consisted of a six-foot wooden square frame placed at midcourt and lined by alternating white and black balloons.

Competing for the championship were widely varying Lego robotic constructions on wheels powered by Mindstorm computers. A thumbtack was affixed to each “robot,” and the object of the game was to program your device to pop white balloons, avoid black ones and finish with a better white-to-black ratio than opponents. 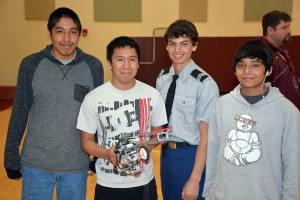 After surviving several one-on-one rounds, Pisgah High’s team came out on top with a one-pop differential in a three-way final against Cherokee and Hiwassee Dam. But, participants from all teams agreed the programming skills they fine-tuned during Southwestern Community College’s Sponsored event could have a far longer-lasting impact on their lives than the average sporting contest.

“Robotics for middle school and high school students is great because this field is going to play a huge role in society,” said Pisgah sophomore Nick Abbott, whose teammates included Jonathan Owenby, Paul Shvidrik and Chris Skinner. “It’s awesome for younger kids to get a taste of that. A lot of people like to play sports, but this is a whole other opportunity.”