“We mourn our fallen…” 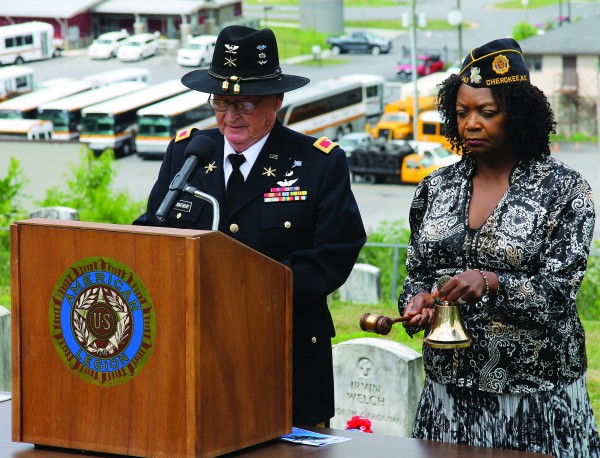 During a Ringing of the Bell of Honor ceremony at a Memorial Day Observance at the Yellowhill Veterans Cemetery on Monday, May 25, Col. Bob Blankenship (Ret.) reads a list of EBCI tribal members who were killed in action as Legionnaire Phyllis Shell rings a bell in their honor and memory. (SCOTT MCKIE B.P./One Feather photos)

Cherokee soldiers who lost their lives in the line of duty were honored and remembered for their sacrifice during a Memorial Day Observance on Monday, May 25.  The Steve Youngdeer American Legion Post 143 hosted the event at the Yellowhill Veterans Cemetery.

“The men and women buried here at Yellowhill, at Arlington, and in national cemeteries around the world paid a great price for the freedoms that we enjoy,” said Lew Harding, Post 143 Commander.  “It’s hard to complain about the high cost of anything when you think about the high cost that they paid for our freedom and the lives that we live.”

Commander Harding added, “Today, we mourn our fallen…the flag-draped coffins of our fallen heroes and these white stones, here at Yellowhill, note the courage and the sacrifice that they gave on our behalf.  So, it is my privilege, on behalf of a grateful nation, to pledge to them to work for greater peace, greater unity, greater forgiveness, and greater love.” 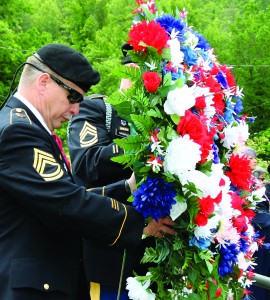 Sgt. Cliff Long and Sgt. Alva Brown lay a wreath in honor and memory of EBCI tribal members that were killed in action in WWI, WWII, Korea, and Vietnam.

During a Ringing of the Bell of Honor ceremony, Col. Bob Blankenship (Ret.) read a list of EBCI tribal members who were killed in action as Legionnaire Phyllis Shell rang a bell in their honor and memory.  The list included:

“They live in our history,” said Commander Harding.  “They reside in our hearts, and they rest forever in the arms of God.”

Richie Sneed, US Marine Corps veteran, gave Monday’s keynote address where he spoke about liberty, “What we must understand, as Americans, is that liberty has never come without a cost.  If you and I are to have liberty, we must seize it, possess it, and defend it against all enemies, foreign and domestic.  Liberty should be, and used to be, the highest ideal in America.  Many excellent men and women have willingly laid down their lives to preserve this ideal and to preserve this nation.”

Sneed went on to say, “The idea of liberty may be dormant in this generation, it is not dead, and we who understand the virtue of liberty and the price that has been paid to preserve it have a solemn duty to remember those who have made it possible for us to enjoy the benefits of their sacrifice and to instruct those who lack knowledge of the past.”

Following a patriotic reading by Col. Blankenship, a wreath was laid by him, Sgt. Alva Brown and Sgt. Cliff Long.  The program also included a musical presentation by Shell who sang “In Honor of Those Who Served”.

To view or purchase photos from this event, visit: https://onefeather.smugmug.com/2015-Community-Events-and-News/Cherokee-Memorial-Day/