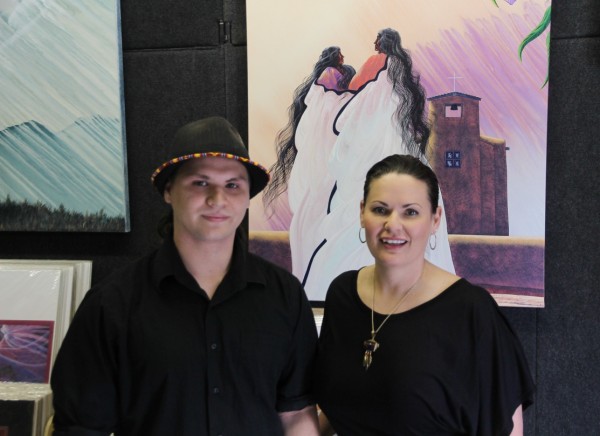 PRYOR, Okla. – Traci Rabbit stood at an island inside her studio with unfinished paintings hanging around the room. Instead of working on her own pieces, she was spending time offering advice to Talon Kingfisher.

“Never sell your copyright,” she said as Kingfisher nodded, absorbing the information. “You can license it, but always hold on to the copyright. That goes for your dad’s work, too.”

Rabbit and Kingfisher share many similarities. Both are Cherokee citizens from Mayes County. Both are artists. Both honed their skills from their fathers.

A difference is Rabbit is an experienced artist, who honors her late father’s legacy by offering an annual Bill Rabbit Legacy Art Scholarship that provides a student $1,000 for a school year. This year’s recipient is Kingfisher, a Salina native entering his third year at Rogers State University.

“I’m extremely honored to be awarded this scholarship,” said the soft-spoken Kingfisher. “It means a lot to be recognized by Traci and to have a scholarship in her father’s name.”

Kingfisher started drawing at an early age, but his focus turned to playing music in his teenage years. He still spent time in the studio with his father, Dino, learning how to do acrylics and dabbling in the art himself.

As he progressed through high school, Kingfisher’s attitude shifted and he began to take his art more seriously.

Five years later, he is on course to earn a bachelor of fine arts with an emphasis in studio art. He currently has artwork hanging in numerous Cherokee Nation facilities, including the Cherokee Nation Veterans Center, Hard Rock Hotel & Casino Tulsa, and Cherokee Casino and Hotel Roland.

“I love to paint animals that are native to the area and connect back to ancient Cherokee culture,” Kingfisher said. “I really enjoy painting woods sceneries. My dad has been a major influence on me.”

For a student to earn the Bill Rabbit Legacy Art Scholarship, one must be a Cherokee citizen who lives in the Cherokee Nation jurisdiction. Rabbit said the student has to be actively involved in any form of art, including music, but can be majoring in other fields like business or marketing.

When she launched the scholarship three years ago, Rabbit quickly learned how tough it is to get the word out to students, so she partnered with Cherokee Nation Foundation. The foundation accepts the applications and essays and then hands them over to Rabbit, who chooses the recipient.

“I had been watching Talon’s work for a while,” Rabbit said. “I had judged some of his work in competitions and knew his family background, so it wasn’t hard to choose him. I know great talent when I see it.”

Funding for the scholarship is generated from a silent auction at the annual Cherokee Art Market and from donor contributions. Rabbit also sells a special shirt in her studio and at art shows to help raise funds.

“My goal is to help keep the arts alive in the Cherokee Nation,” Rabbit said. “With reduced arts funding and programs being cut in schools, we need to do what we can to ensure future generations continue to tell our story through art.”