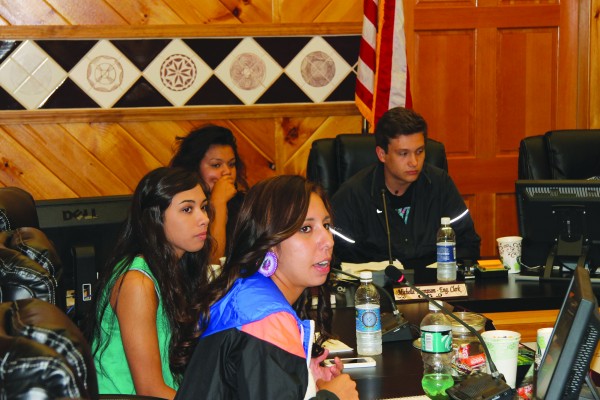 Members of the Junaluska Leadership Council hosted a Meet the Candidates forum for Yellowhill candidates on Thursday, May 14. (SCOTT MCKIE B.P./One Feather photos)

Candidate Arizona Jane Blankenship told the JLC that language is very important to the future of the Cherokee people. Leaders need to be listening to the people more. The tribal government needs to think more long term in regard to the future of the Tribe. Business development, reality budgets compensation and human resources benefits are her background. She believes EBCI needs to develop its own laws and not depend on the state and other laws. She feels the protection of tribal sovereignty is also key to the success of the Tribe.

Candidate Anita Lossiah said that she brings education and experience in business and law to the race. She feels the Tribe should protect what makes the people inherently Cherokee, namely the language, culture and tribal sovereignty. Lossiah stated that she will listen to the community and hear their concerns. She believes that tribal members should have more housing opportunities, small business development, better job training, elder home care, education, veteran services, better land records through a public register of deeds, and better due process from an administrative law code. She said that is what she has heard from her community and that is what she wants to provide.

Candidate Tom Wahnetah said his business experience, seeing how things work and knowing the right people to get the job done and “to get the Tribe on its feet” are the reasons that he is running. He will advocate for more housing and assistance for elders and children. He said that elders currently struggle to pay for heating and cooling. Wahnetah said the Tribe should “put more into our youth”, emphasize the advantages of youth sports and make resources more available.

Blankenship:  She believes that it would be a good idea to alleviate a tax burden, possibly breaking it into two payments. Blankenship would like to hear from the youth on whether or not they are in favor of it before any decision is made by the government. With proper financial education, she feels that the youth could decide for themselves whether or not this is a good idea.

Lossiah:  She is in “great support” of it and would like to see three or more staggered distributions. She said it would provide significant tax savings and said, from personal experience with her children, that she knew it would make a difference.

Wahnetah:  He feels that it is something the Tribe needs to look into. The Tribe needs to educate the children better on finance – more than just a couple of hours of training – and to possibly start in middle school. Wahnetah feels that the EBCI youth should vote on it, possibly through the JLC, and bring the result to the government for consideration.

Lossiah:  She is in support of a constitution for the Tribe. She feels it would bring a balance of powers and recognize stronger individual rights. She knew of JLC involvement in the constitution and had read the draft.

Wahnetah:  He thinks the Tribe should have one. He stated that other governments have a constitution, this Tribe has had versions of one and it should put one in place now. He is aware that the JLC was involved in the latest draft and has read the draft of the constitution.

Blankenship: In honor of her grandfather and grandmother, who showed her that as a council member he touched the lives of many people. They taught her that she should “step up” and serve her Tribe. She felt like it was time for her to step up.

Lossiah:  Yes, absolutely. Tribal Council is responsible for the budget. She said that the Council should review more data, but take a big picture approach to approving budgets. Lossiah stated that she understands that there are some materials that cannot be shared in the best interest of the tribe, but Council and the government should share as much as possible publicly so that the community knows what is being spent and its use.

Wahnetah: Honesty is the best moral. He has always tried to tell the truth and do the right thing. He believes in making decisions from the heart.

The Junaluska Leadership Council read a message from Tribal Council Representative B. Ensley who could not attend the forum due to a prior engagement.

After the Tribal Council candidates, the JLC hosted a school board candidate.

One candidate for school board from Yellowhill was in attendance, Jennifer Thompson. She has a bachelor’s (WCU), master’s degree (WCU) and doctorate from UNC-Chapel Hill. Thompson has served 12 years at the hospital as a physical therapist.

Thompson stated that she would visit the school and has attended most of the games. She currently works with the athletic trainer at the school. She would stay in close contact with students and teachers because it is important that all have open and frequent communication with the school board.

Thompson said a definitive “No”. She feels it definitely needs to be implemented more in the school system. Progress has been made over the years, but more can be done.

Thompson concluded that she wants to be a voice for the students, parents and teachers.

She and the Tribal Council candidates thanked the JLC for the opportunity to speak to the community.