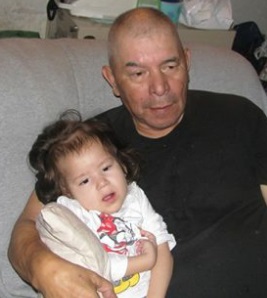 Francois Elliott (Dump) French, 72, of the Big Cove Community, went home to be with the Lord Tuesday May 12, 2015 at Cherokee Hospital with his family by his side. A native of Cherokee, he was the son of the late Meroney and Viola Twin French. He was a member of the Big Cove Free Labor.

He was preceded in death by a granddaughter, Prestyn R-ly Panther; brothers, Roy, Johnny, George, and Landon French, and Jack Lindsay, and sisters, Mary Standingdeer, and Winnie Scott; and a great granddaughter October Raine French.

He is survived by his wife Gloria Panther French of the home; sons, Corbin Panther, Aaronn Squirrel, and Merrill Panther; and daughter, Angela Panther all of the home; and sons Seymour French, George French, and Jamison French of Cherokee; eight grandchildren, and four great grandchildren; sisters, Dolores Maney, Yvonne Bushyhead, and Lucetta French all of Cherokee; brothers, Marvin French, and Gary French both of Cherokee, and several nieces and nephews.

Funeral Services will be held at 2pm on Friday, May 15 at the Big Cove Recreation Center. Pastors Charles Ray Ball and James (Bo) Parris will officiate. Burial will be in the Panther Family Cemetery with Military Graveside Rites conducted by the Steve Youngdeer American Legion Post #143.

The body will be taken to the Big Cove Recreation Center at 4pm on Thursday, May 14 by Crisp Funeral Home to await the hour of service.

Honorary pallbearers will be members of the Free Labor.