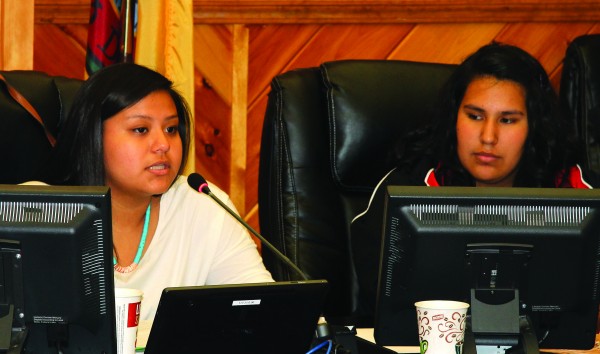 Taylor Nelson and Lou Montelongo, both members of the Junaluska Leadership Council, are shown at a Meet the Candidates Forum for Birdtown on Tuesday, May 12 in the Tribal Council Chambers. (SCOTT MCKIE B.P./One Feather photos)

The Junaluska Leadership Council (JLC) hosted two nights of candidate forums for the Birdtown Tribal Council candidates.  The forums were held in the Tribal Council Chambers on Monday, May 11 and Tuesday, May 12.  Each candidate was given two standard questions upon arrival, and then they were given randomly-selected questions following those.  Following is coverage of the May 12 event:

Candidate Soloman “Slick” Saunooke commented, “I’ve been involved in the Council for a few years.”

Candidate Curtis Wildcatt said, “I’m running for Council for our future.  I think it’s time we get a different philosophy, a different approach to some of our decision-making and some of our planning.”  He said everyone needs to become more informed and do more research on the issues.  “We definitely need to diversify our revenue resources.”

Wildcatt said he would like to see an enhancement of Cherokee Central Schools including offering Cherokee language from Kindergarten through 12th grade and advanced math courses.  He also said that financial education should begin much earlier than it is now.  “I think you guys should be well aware of investment opportunities, even retirement plan opportunities.”

He stressed the need for education after high school.  “Whether it is college or a tech school, some higher learning is necessary.”

Candidate Jeff McCoy said he was in law enforcement in the area for 15 years and then worked at Harrah’s Cherokee Casino helping to set up the guest safety program.  He then worked for eight years as a contractor.  “I’d like to wish all of the other candidates good luck at this time.”

Candidate Travis Smith related, “I see myself as a strong leader with a strong mind that can help our Tribe grow and overcome the hurdles that our entire Tribe is facing.  I want to be your Council member that listens, discusses, and brings your thoughts and problems to the table.”

Some of the issues he wishes to address if elected include:  separation of government, a Tribal Constitution, electing the Chief of Police, preserving heritage and culture, higher education, and electing the Chief Justice and strengthening the Tribal Court.  Smith said he also wishes to take the oversight of the Tribal Human Resources Department from the Executive Office.  “In my opinion, this should be a stand-alone program or a separate entity.  Executive Office should only sign off on final approval of hire.”

Smith said he would like to see a Legal Aid Office established, and he wants tougher consequences for elder abuse.  Several other things he wishes to implement include a Code of Ethics for Tribal Council and the Executive Office.  “Our elected officials should be held to a higher standard.”

Candidate Terri Taylor commented, “I have been at this podium a number of times throughout the years to fight for our rights…I have fought for equal housing.  There’s so much that can be done for our people if it were just done right.”

She said she is against the “good ol’boy system” and noted, “That has really hurt this Tribe.”

Taylor added, “Everyone is right, higher education is a good thing, but when you come back, can you get a job?”  She said long-term planning is needed for energy sources and answers to the drug problem.

Wildcatt:  “I think it’s an option that they should have.”  He said parental involvement in financial education is needed.  “There are some people who have never had more than $100.  How are they going to be when they get that large lump sum?  Are they going to be doing wise things with it?”  He continued, “There needs to be early education.  There needs to be something starting in 7th grade that helps you deal with this large lump sum.”

McCoy:  “It’s a good idea.”  He said there needs to be a clause though that if someone needs their money earlier then they can apply to receive it.  “I think it’s a good idea.”

Smith:  “I would agree with that.  I think that our biggest key to that is getting them some education.”  He wants the education on the distribution increased.  “I can agree with it, but I think there are some other things that go along with it also.”

Wildcatt:  “I think it’s great.  It’s needed.”  He praised the Junaluska Leadership Council for their work on a Constitution.  “I think you guys have put together a great document.”  He added, “A Constitution separates power.  There’s a reason for that.  With the United States, it works pretty well for the most part.”  He said he will support it. “I think it is beneficial to our people.”

McCoy:  “I think it’s a great idea…I would support it.”

Smith:  “It is something that is needed to actually separate our governments and help us move forward.”  From the drafts he has read, he would like to see some of the powers of the individual branches defined further.  “Other than that, it is a great idea.”

Taylor:  “I look forward to a Constitution.  We should have had one a long time ago.”

Saunooke:  JLC didn’t ask these questions of the candidate.

Wildcatt:  JLC didn’t ask these questions of the candidate.

McCoy: “Just from what I’ve heard, but I’m not really familiar with it.  Not all of it.”

Smith:  “I am, and I thank you for pushing ahead with that.  I know there is also a Constitution Committee, and I appreciate both of ya’ll’s efforts.  I have”

Wildcatt:  “I think we are doing the best we can.  If you’ve ever experienced it, hopefully you haven’t, it’s a touching situation.  I think that right now we have some pretty good things in place.”

Taylor:  “It wasn’t done the correct way, and I stood at this podium and said, ‘this is not the time, the economy is not right’.  It needs to be looked at further.  I hate to say this, but it was planned probably way before anyone knew about it.”  She added, “My thoughts on it are, we’ve got it, we have to make the best of it.”

Smith:  “I bring a strong work ethic to the table here.  I believe in putting in an honest day’s work.”  He said he is responsible and accountable.

McCoy:  “They need more skills and classes on it.  They need an investment person to come in and talk to them about it…they just need more education.”

Saunooke:  “Right now, I really oppose it.  I don’t really know that much about it.”  He said he will research it further.

Taylor:  “I think a lot of people who want to become foster parents don’t because they get looked at constantly.”  She said a friend of hers who was a foster parent had Social Services monitor her.  “I think that’s kind of backwards.  They should be monitoring the parents and find out what’s going on.”  She added, “Years ago, when a child was mistreated or didn’t have a home, they would go live with a relative, or someone would step in and get them.  Nowadays, the laws are so strong and so hard.”

McCoy:  “The youth need things to do on the reservation, and we need to get our economy up.”  He said Cherokee used to be a busy, bustling town.  “Now, you drive through town and 10-15 businesses are closed.  We need to do something to get the economy going back in town.  We need to get things in here that tourists like to do who don’t like to do gambling…our town is drying up.”

Wildcatt:  “If I’m elected, I’d love to see every nickel spent accounted for.”  He said it should be public information.  “That’s information that’s going to make me comfortable authorizing these budgets.”  Wildcatt added, “Everyone could see where the money is going and how’s it’s being spent.”

Smith:  “I don’t think there’s one solution to fixing our drug problem.  I don’t think we can ever put a stop to it.  We need to take a close look at our programs that we have here and offer alternatives to people that are addicted that want to stop.”  He said tougher sentences should be imposed for those who do not want to change their lives.

Smith:  “You have to change your friends, your habits and the people you hang out with.  I believe it would have to be moved off the reservation to get away from other people and the influences.”  He said he knows of people who have gone to rehab and have not come back to Cherokee so they can avoid the influences they were under before.

Smith:  He said he knows of a center in Raleigh that helps pregnant women.  “I can agree and I can disagree with that.  We’ve talked about giving a kid a fair chance.  A lot of these kids don’t get a fair chance, but to be born addicted.”

Saunooke:  “I’m all for it.  I’ve been for it for years.”  He said he would like to see the Chief of Police and the Chief Justice be elected positions.

Wildcatt:  “I think there is a disagreement in the community.  The community felt like it wasn’t authorized.  Council felt like it was.”  He said a long time ago, a Council member received only $5 per meeting that they attended.  Wildcatt added, “Yes, there is disagreement, but there also needs to be resolution.  There needs to be ground rules set out where this cannot happen again or a pay raise is given at this time, on a time frame.”

McCoy:  “I would try to get it started in our schools at an early age and teach it all the way up the same as English or Math.”