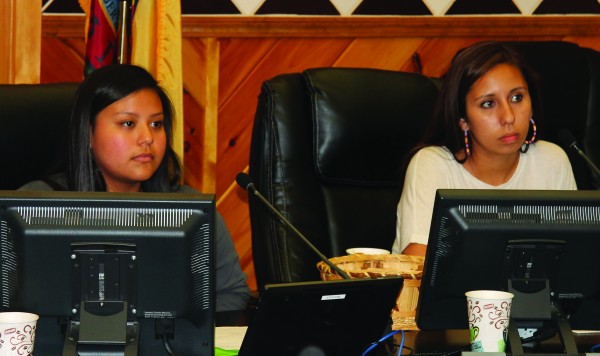 Taylor Nelson and Amy West, both members of the Junaluska Leadership Council (JLC), are shown at the JLC Meet the Candidates Forum for Birdtown held on Monday, May 11 at the Tribal Council Chambers. (SCOTT MCKIE B.P./One Feather photos)

The Junaluska Leadership Council (JLC) hosted two nights of candidate forums for the Birdtown Tribal Council candidates.  The forums were held in the Tribal Council Chambers on Monday, May 11 and Tuesday, May 12.  Each candidate was given two standard questions upon arrival, and then they were given randomly-selected questions following those.  Following is coverage of the May 11 event:

Incumbent Albert Rose thanked the JLC for hosting the forum and for taking the time to become involved in the tribal government.  He said he first ran for office in 2013 at the request of his family, friends and community members.  “The community wanted change, somebody that was going to be present and someone that was going to work in the community,” said Rose.  “When re-elected, I will continue to show up for work every day.  I will continue to be the voice for not just my community, but all tribal members and continue to work to improve the quality of life in areas such as health and safety, education, housing and economic development.”

Rose also said he will support tribal elders and tribal employees.  “I also want to work on restoring that bridge of trust between the Tribal Council and the people.  I believe that was really broken with the pay increases…I protested the budget, I didn’t sign my conversion sheet, and I did pay my retro pay back two weeks ago.”  He concluded by saying, “I’m a leader that doesn’t just offer up change as a slogan, but real, meaningful change.”

Candidate Gilbert Crowe said he would like to see the Tribe elect the positions of Chief of Police, Attorney General, and Chief Justice.  “I think that if these positions are elected, then the Chief, nor anyone else, can stand behind them and tell them what to do.  I have been pushing that out in the community since February of this year.”  Crowe said he wants to help with the drug problem on the reservation.  “If we can band together, we can help these that really want help.  All it takes is just a little pressure and a little push.”

He added, “I want to be here for the people because I don’t think that I’m no different than you…I think that we’re all equal, and that’s how I look at a lot of things.”

Candidate Ray Long said he has worked for years with various programs and entities of the Tribe including Harrah’s Cherokee Casino Resort and the EBCI Wastewater Treatment Plant.  “I have the knowledge of how the Tribe operates some of the programs.”  Long said he believes in a “truly transparent” government.  “I think we should stop the finger-pointing.  We should be moving forward instead of looking back at the mistakes we’ve made in the past.”

Long said the Tribe provides many services, but said that more education needs to be provided to the community so that everyone is aware of what services are available.  “We just need to create consistency in how we operate every department within the Tribe.”  He said there are some issues “that are bigger than Tribal Council” that should be voted by the voting membership of the Tribe.

Candidate Dwayne Stamper said, “I think tribal government has lost their way in the way they are spending.  A lot of things that they are spending money on, as I see it, in my opinion, it is unjust.”  He added, “The voice should be given back to the people…I want to be that voice in Birdtown that carries the message back to Birdtown and let them know that this is what we’re going through right now.  This is what is on the agenda.”

He said reporting back to the community so they can be involved in very important.  Stamper said he will try to increase community involvement and support.  “It’s going to take a lot more than one person.”  He related, “If I’m elected, they won’t have to look for me.  If I’m not in this Chamber right here, as a Council member, or in a Committee meeting, I’m going to be parked down there in Birdtown so people can check in with me if they need some help or some guidance.”

Candidate Mernie Taylor said he hears a lot of issues and concerns from people in his community.  “I tell the people that if it’s applicable, I can do it.  I’ll try to do it, and I’ll do the best I can.  I’m not promising anyone anything because if you promise someone and it’s not done, it’s like you’re lying to them.”  Taylor related he has worked for Community Services and the Cherokee Fire Department for many years.  “I want to work for this community.”

He said he received many calls for help over the years he was with the Fire Department.  “People call you to work, to help them out, and a whole lot of families in Birdtown need help.”  Taylor said one major problem in his community that he wants to help solve is the drug problem.  “For our young kids, to me, there’s not much here in Cherokee for them to do…I see a lot of kids out here just roaming around the street.”  He said parental involvement is important.  “I’m not here for what I can get from it.  I’m here to get the people what they need.”

Candidate Greg Owle said he has over 21 years of managerial experience in various places “all of which dealt with multi-million dollar budgets”.  One of his major platform issues is making sure that Tribal elders are taken care of properly.  “Another area is that we need to manage and protect our Minor’s Fund.”

Owle also said attention needs to be paid to the local economy.  “We need to create more diversified commerce opportunities…we need to look at things that will draw families back to Cherokee.  I don’t know if you remember, or if you’re too young, but, when I was young the traffic was backed up for miles to come into Cherokee.”

He also mentioned the need for more things for Cherokee youth to do.  “Nowadays, they don’t have a lot of things to do, and idles hands are the Devil’s playground.”  Owle said this can lead to addiction problems which needs to be addressed by everyone.  He ended with, “We should take the veil off of tribal government.”

Rose:  “I think that’s a great piece of legislation that you guys (JLC) brought in…I think, in the long run it will actually save the individual money in taxes.”  He said it will also give the individuals times to mature so they can truly appreciate the money being received.  “I will support that.”

Crowe:  “That’s a good idea, but the way I look at, I think that if you can sign up and go fight for your country and die for your country, that’s your money.  You should be allowed to get it however you want it.  If you want staggered payments, then you can set that up and do so.”

Stamper:  “I think it’s a good idea…I think if parents have taken the time and instilled values into their children, I think you could save your own money.  You shouldn’t be told how to spend that money.”

Taylor:  “I am for the staggered Minor’s Fund if achieved in the right way because I know some kids might need the money early, whether for college or something like that.”

Owle:  “I think it’s real important that we continue to do the investment advisement for our children.”  He added, “It’s an idea, but it’s not the only idea.”

Rose:  “I can support that too, and as soon as we get a draft, I think we need to get that out to the people and let them review it and let them vote on.  But, yes, I fully support a Constitution.”

Stamper:  “I thought that there was one in place.  They always talked about one, and now it’s coming up that they’re working on one.”

Owle:  “I think a Tribal Constitution is wonderful.  We had the Lloyd Welch Constitution in the 30s that came through, and my dad spent a lot of time discussing it with me and gave me a copy of it, and it turned into a State Charter, and that’s what we have amended over the years.  And, so, I think a Constitution is something that is needed.  It needs to be tribally voted on.”

Owle:  “Yes, and I think that’s wonderful.  I think that you guys are the future leaders of this Tribe.  No, I am going to get a copy right now.”

Owle:  “He said it was would a good thing to have the office not overseen by the Executive Office.  “Any time that you can separate power and the different branches of government, I am all for it so I think that would be a great idea.”

Long:  “The information that I’ve gathered out in the community is that it’s a bad thing.  They don’t feel it was right.  I personally don’t feel it was done right either.  It wasn’t fair to the tribal employees who go by a set of standards to get their raises and stuff.  The Council and Chiefs should have to adhere to some set of guidelines.”

Rose:  He said a program is currently being worked that would establish 27 foster homes in the community.  “That’s a good idea.  We’ve got the resources to do whatever need, so we need to get it done.”

Crowe:  “Honestly, no, I think we need stiffer laws for these perpetrators.”

Stamper:  “Section 17, I am against.  I do not think it’s a good idea.”  He said it has worked in other Tribes but added, “I don’t think it would be a good idea for here.”

Taylor:  “I’ve had people asking me to run for Council from two years ago.”  He said representing the people is a big honor.  “Sitting around the horseshoe, I’m here for everybody.”  He added that he wants to work for the people and help address as many issues as he can.

Long:  “That’s another issue that I don’t think was handled correctly by the Council.  It’s one of those larger issues that should have gone out to the public…I am against large spending of the Tribe.  I think we need to cut back on it.”

Crowe:  “I’ve got leadership.  I have owned a business for the past 15 years. They say if you make it past three years, you’re doing something right.  I just want to be here for the people; all people, not just Birdtown, but the whole Tribe as a whole.”

Taylor:  “See where the need is for the kids in high school.  There are a lot of do’s and don’ts, but if you’re doing the right thing for the schools and the kids, that’s what I’d like to see.”

Stamper:  “There needs to be more things to do here, not just for the visitors, but for the people that live here.”  He added, “I think there needs to be a more concerted effort to combat the problem itself at home…it starts at home with the parents.  Parents need to be responsible.”

Rose:  “I think our language is the heartbeat of our Tribe right now, and I supported it 100 percent that to have Kituwah (Academy) move to the (old) high school so they’d have more room.”  He added that he’d like to see the language program expanded.

Owle:  “Yes, I absolutely believe that all part of the tribal government need to more transparent.  Everyone needs to know what’s going on, and everyone should have a voice in what needs to be done.”