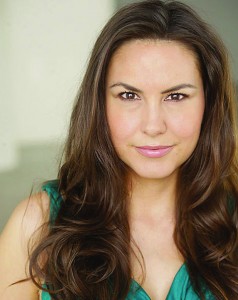 Actress DeLanna Studi, a Cherokee Nation citizen, announced her new project on Wednesday, May 13, “And So We Walked/An Artist’s Journey Along the Trail of Tears”. (Contributed photo)

Actress DeLanna Studi, a Cherokee Nation citizen, announced her new project on Wednesday, May 13, “And So We Walked/An Artist’s Journey Along the Trail of Tears”, produced by the Thomas S. Kenan Institute for the Arts which is affiliated with the University of North Carolina School of the Arts.

She explains how the project was conceived, “As a Cherokee actor in Los Angeles, I am all too aware of how our Native people are depicted on stage and screen.  Many of these stories center on the heroic acts of Native American men and often overlook the stories of our women.  As a Native actress, I have witnessed too many of our women relegated to the background or viewed as a victim, a princess, or an exotic thing from the past best viewed behind museum glass.”

She added, “With this information, I had two choices: either complain about the problem and wait for Hollywood to create authentic and accurate Native American characters; or address this issue head on, creating a piece that shows the complexity of our beautifully diverse people that captures who we are now, where we came from, and most importantly where we are going.”

In partnership with the Eastern Band of the Cherokee Indians, “And So We Walked” is an official social justice project at the University of North Carolina at Chapel Hill. Project partners include the National Trail of Tears Association, The Museum of the Cherokee Indian, Unto These Hills, The Autry National Center, Native Voices Theatre and the American Indian Center and Center for the Study of the American South at UNC – Chapel Hill.

With Project Manager and Documentarian, Jesse Abdenour, and her father Thomas Studie, a Cherokee Citizen and speaker, Delanna will begin, in May, a six-week long community engagement that will trace the northern route of the Trail of Tears.  Along the way, the project working in partnership with dozens of community organizations, will be hosting workshops and storytelling circles, while also gathering and documenting stories to inspire a future work.

Three workshops have been scheduled at the Museum of the Cherokee Indian that are free and open to the public.  There will be light refreshments served before each event.  The workshops are:

Studi, a Cherokee Citizen from Liberty, Okla., is an actress, advocate and youth mentor and is a current ensemble member of America’s only Native American Equity Theater Company Native Voices at the Autry.