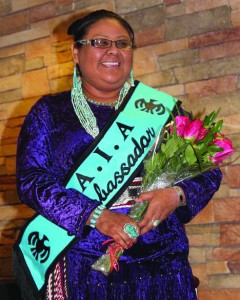 Alberta Nells was selected as the IAIA Ambassador for the upcoming school year. (IAIA photo)

SANTA FE, NM – A competition, hosted by Bobby Wilson of the comedy group the 1491s, was held recently on the IAIA campus to select the IAIA Ambassador for the 2015-6 academic year. The IAIA Ambassador represents the Institute by creating and strengthening positive relationships with the greater community through educational and service activities.  The IAIA Ambassador also receives support and funding to work on a community initiative of their choice.

Alberta Nells was selected as the IAIA Ambassador for the upcoming school year.  She is Dine’ and Chiricahua Apache and is of the Wondering People Clan and Born for Salt Clan. She is originally from Hard Rock, Ariz., but she resides in Flagstaff, Ariz. and is currently a junior majoring in Indigenous Liberal Studies.

Her talent was singing a traditional blessing way song.  This year, at the 2015 AIHEC Student Conference in Albuquerque, Nells was the team captain of the IAIA Hand Game Team that took third place.  She also won the Hand Game Best Spirit Individual Award.

“Alberta is an energetic young native woman, who is well spoken and whose smile and laughter is contagious,” said Carmen Henan, IAIA dean of student life.  “She is a true ambassador for IAIA.”