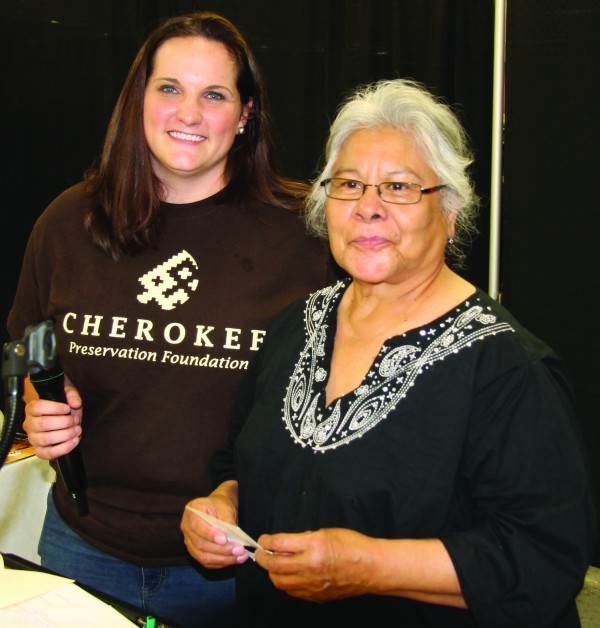 Since its Community Celebration last spring, the Cherokee Preservation Foundation (CPF) has awarded 41 grants totaling over $4.8 million.  The organization celebrated the successes of their grantees during this year’s Celebration held at the Cherokee Indian Fairgrounds on the evening of Thursday, May 7.

“The theme of our Celebration tonight is Preservation through Innovation:  The use of technology by grantees to preserve, enhance, and create,” said Annette Clapsaddle, CPF executive direction.  “These grantees are really structures that prepare workforces with opportunities for the next several decades.”

During the event, Clapsaddle presented several awards to grantees including the following:

Several groups of grantees gave presentations on their projects during the evening including Laura Pinnix and Heather Driver, both of Cherokee Central Schools, who spoke about a Cherokee language app they have developed called Shi-yo App Level 1.  The app, which has been a collaborative effort with the New Kituwah Academy, will be available to the public in a few weeks and is meant for novice and beginners speakers of the Cherokee language.

“We have more access to the internet than we ever have had,” said Pinnix who related that the app is broken into 23 categories of words such as days of the week, commands, time, and seasons.  “We want to thank the Cherokee Preservation Foundation for helping to make it happen.”

Yona Wade, also of Cherokee Central Schools, spoke about the CTE (Career and Technical Education) opportunities that have opened up at the schools due to CPF funding.  He told of the three main categories of CTE programs including:  FACS (Family and Consumer Science), Agriculture, and Film and Engineering.

Other grantees set up booths at the Celebration to inform the public about their programs such as the Snowbird Community which received a grant for $40,262 “to continue the 2015 Snowbird summer (Cherokee) language camp and adult classes” and the New Kituwah Academy which received $221,150 “to support their ongoing development and delivery of Cherokee language instruction.”

Clapsaddle thanked all of the grantees for their work and said the Cherokee Preservation Foundation appreciates all of the partnerships.  “As you can see, there is excellent work going on in the Qualla Boundary and around the region.”

To view or purchase photos from this event, visit: https://onefeather.smugmug.com/2015-Community-Events-and-News/Cherokee-Preservation/