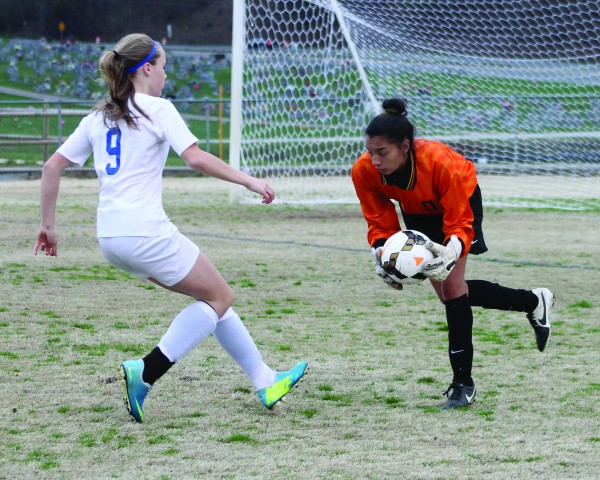 Brittney Driver (right), Cherokee goalkeeper, scoops up the ball before Smoky Mountain’s Taylor Douthit (#9) can get a shot off during a game at Smoky Mountain on Tuesday, March 26. (SCOTT MCKIE B.P./One Feather)

SYLVA – The Cherokee Lady Braves had a tough road loss at Smoky Mountain on Thursday, March 26 in a rare night game.  Smoky Mountain’s Katie DeWeese and Taylor Douthit each got a hat-trick (three goals) as the Lady Mustangs took the win 9-0.

“It was a tough game,” said Gary Ledford, Lady Braves head coach.  “We went up against a good team tonight.  They are disciplined, skilled, and deep.  They have their starters back from last year, and they were a playoff team last year.  We just don’t have enough firepower, but you’ve got to give it to our team for sticking in there.  We’re working with zero subs – no bench whatsoever.”

Both teams played nice defense in the first 10 minutes of the match.  But then, Smoky Mountain began to open it up some and got some passing lanes established.  DeWeese scored the first goal of the match at 29:24.  Six minutes later, Douthit scored her first following a corner kick at the 22:48 mark.

Douthit added another just two minutes later to make it 3-0 in favor of Smoky Mountain with just over 20 minutes left in the half.

Cherokee had its best chance of the half when Avery Guy went on a long 60-yard run by herself and drilled the ball towards the goal from about 10 yards out, but the ball hit the post and Smoky Mountain cleared it out.

Three minutes later, Douthit got her third of the match to make it 4-0 with 4:43 left in the half.

Then, less than a minute later, Kaitlyn Karcher scored the fifth goal of the half for Smoky Mountain following a corner kick.  The Lady Braves trailed 5-0 at the half.

Smoky Mountain kept the pressure up in the second half and didn’t allow Cherokee a single shot or corner kick.  The Lady Mustangs took 13 shots including nine on goal and had three corners.  Second half goals for Smoky Mountain included:  Karcher (32:48), DeWeese (31:00), Heather Watson (18:58) and DeWeese (9:49).

“We’re young at this,” said Coach Ledford.  “I intentionally scheduled some tough teams because you don’t get better at soccer, or any sport, by playing teams that are weaker than you.  We’re good.  We’re getting stronger.”

He praised his team’s progress already this season and said that they are a completely different team than the one that started the season.  “We look so much better, but we’ve got a lot of work to do.  Give us a little bit of time, and I think we’re going to surprise some people.”

To view or purchase photos from this match, visit: https://onefeather.smugmug.com/SPORTS/SOCCER/Lady-Braves-2015/At-Smoky-Mountain-March-26/i-VZhzxth