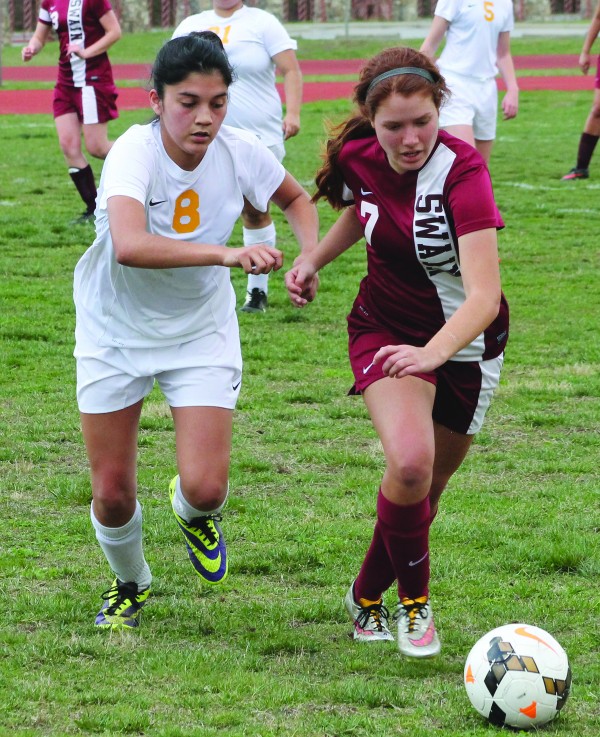 The Cherokee Lady Braves battled the Swain Lady Maroon Devils, and the lack of any substitutes, during a home match on Monday, March 23.  Swain topped Cherokee 5-1 as the Lady Braves took the field with 11 players and no bench.

“It was tough today, it was really tough today,” Gary Ledford, Lady Braves head coach, said after the game.  “We faced a lot of adversity from the get-go, before we even stepped on the field, but the team played tough.  They did not stop.  They did not quit, and they just kept hammering through until the very end.”

Ledford added, “We’re running with zero subs right now.  The team you see out there is the team we’ve got.  Hopefully, next time we play Swain, later on in April, we’ll be ready for them.”

The first half was all Swain as Storm Ledford scored her first of the day on a shot from about 15 yards out that went into the middle of the left side of the net.  A few minutes later, she intercepted a pass from the Cherokee goalie and knocked it in from about 5 yards out for her second goal of the day.

Just before halftime, Swain’s Abigail Durisseau found some room on the right side of the field and drilled a shot from 15 yards out that sailed into the top right of the goal to make it 3-0 in favor of Swain at the half.

Cherokee came out in the second half and was able to move the ball around a little better.  They also began to push the ball upfield more which led to a score of their own.

Sidnie Yanez took a free kick for Cherokee following a Swain foul.  She sent the ball near the goal, and players from both sides knocked the ball around a little when Cherokee’s Samatha Rauch knocked it in for a goal for the Lady Braves to make it 3-1.

Ledford would add two more goals in the last few minutes of the match including a 35-yard blast from about 35 yards out on a free kick.

To view or purchase photos from this match, visit: https://onefeather.smugmug.com/SPORTS/SOCCER/Lady-Braves-2015/Vs-Swain-March-23/