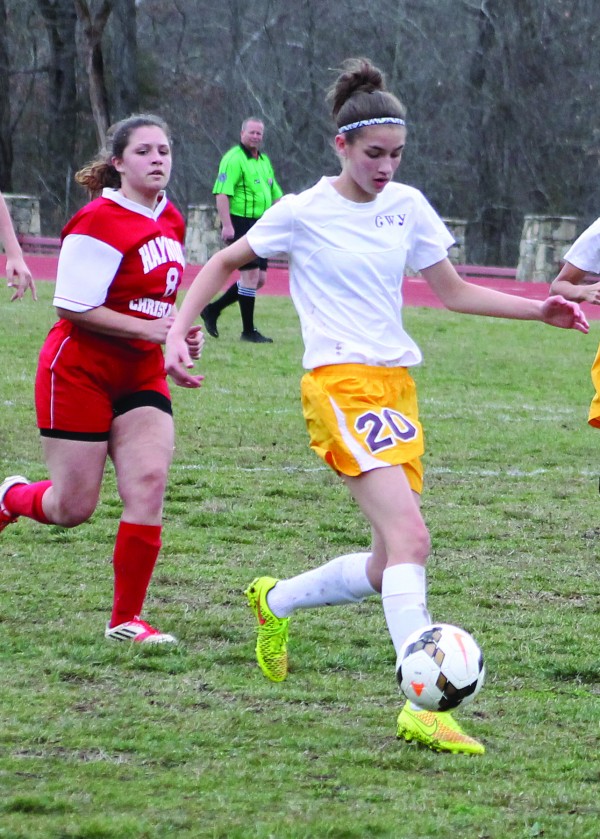 Cherokee’s Alyssa Land (#20) runs past the Haywood Christian defense en route to a goal in the second half of a home match on Thursday, March 12. (SCOTT MCKIE B.P./One Feather)

The Cherokee Lady Braves dropped their home opener 3-1 on an overcast day to the Haywood Christian Academy Red Wolves.

“It was good, we need to put two halves together,” said Gary Ledford, Lady Braves head coach.  “We started off a little slow in the first half, but in the second half, we really, really came back strong.  If we can string two halves together, we’re going to be tough.”

Coach Ledford said his team is very young.  “I’ve got one senior, and the rest are mostly sophomores with a couple of juniors thrown in, but they’re incredibly young.  But, they’re picking it up fast.  I’m very proud of this whole squad.”

The game did start slowly with both teams trying to establish some upfield movement.  Both Cherokee and Haywood Christian had five shots each in the first half.  Haywood’s Hattie Stanberry had two of her shots in the first half hit the back of the net to give the Red Wolves a 2-0 lead at the half.

She added another goal early in the second half to give Haywood a 3-0 lead.  But, Cherokee kept pushing the ball up the field, and it eventually paid off as Alyssa Land drilled a shot at the Haywood goal.  Her shot hit the right post and deflected right back to her, and she put it in the net with a knee kick to make it 3-1.

Cherokee had another opportunity a few minutes later on what appeared to be a foul in the penalty area, but no foul was called and play continued.  Haywood went on to take the 3-1 win.

To view or purchase photos from this game, visit: https://onefeather.smugmug.com/SPORTS/SOCCER/Lady-Braves-2015/Vs-Haywood-Christian-Academy/i-43SNsDq