(Note: This article was updated on Monday, March 16 with new details.)

Facebook was abuzz on the night of Wednesday, March 11 with Cherokee residents seeking answers to what they thought was an explosion near the Painttown Community. It turned out to be a minor earthquake.

According to the Center for Earthquake Research and Information, an earthquake registering 2.1 on the Richter scale occurred 2.1 miles southeast of Cherokee at 11:14 on Wednesday night. The Center related it occurred approximately .5 kilometers (0.3 miles) underneath the surface.

“We did get several reports of what was described as possibly a ‘sonic boom’, but no reports of injury to persons or property,” said Ray Stamper, EBCI Public Safety communications manager. “We got approximately 30 calls reporting the noise and some reporting it shook their house. The Police and Fire & Rescue were dispatched out to different locations to investigate for reports of an explosion. They did not find anything.”

Damon Lambert, EBCI Building Construction manager, stated there was no damage to report on any ongoing construction projects for the Eastern Band of Cherokee Indians.

“We received the first call of many at 12:53am (Saturday morning),” said Stamper.  This call, like the others were from people reporting they felt their homes shaking and were inquiring if there had been an earthquake. The Police and Fire & Rescue were out again looking for possible explosions or persons and property injured. There were no reports of injury to persons or property.”

Another earthquake, the eighth in as many days, was reported on Saturday, March 14 at 11:40am.

According to UPSeis, a seismological website maintained by Michigan Tech, there are approximately 900,000 earthquakes annually that measure 2.5 or less.
Information from the U.S. Geological Survey states that the earliest earthquake on record in North Carolina occurred on March 8, 1735 in Bath. The largest earthquake reported in the state (5.2) occurred in Waynesville on Feb. 21, 1916. 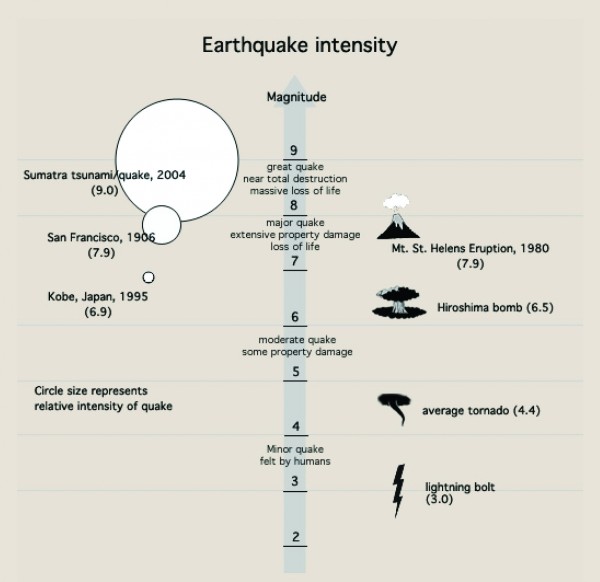 (Graphic by Exploratorium, Faultline: Seismic Science at the Epicenter)