ON THE SIDELINES:  Thanks to Braves, Lady Braves for a great season 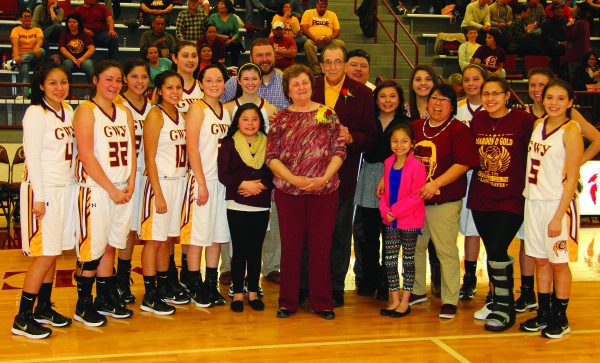 The 2014-15 Cherokee Lady Braves, shown at an honoring recently for Ray Kinsland, finished their season 25-4 and were Runner-Up in the 1A West Regional. (SCOTT MCKIE B.P./One Feather photos)

From the first tip-off at Blue Ridge in December to the final buzzer at the 1A West Regional Finals in Winston-Salem this past weekend, fans of Cherokee High School basketball got a treat this season.  The Lady Braves finished the season 25-4, won their fifth consecutive Sectional Championship, and were Runner-Up in the 1A West Region.  The Braves finished at 24-3 and were Runner-Up in the Section.

Let’s put those numbers into perspective.  Out of a total of 56 games this season, Cherokee only lost seven.  That’s incredible, and is a true testament to the work ethic of the players and the coaches.  Speaking of coaches, a great big round of applause is due to head coaches Willis Tullos and Chris Mintz for their great work this season.

We all got to see some milestones this year as well.

The Cherokee Braves finished the season 24-3 and were Runner-Up in the Section.

Dustin Johnson, senior point guard, passed the 1,000 career points mark.  Both he and Toineeta, along with senior Reagan Barnard, have been selected to play in the Blue-White All-Star game set for Saturday, March 21 at Roberson.

In the coming days and weeks, I’m sure many more post-season awards and recognitions are coming the way of the Cherokee players.

Even beyond all of the games won and the awards gathered this year, the most important thing for me to see is that the Cherokee players won (and sometimes lost) with class, dignity and smiles on their faces.  It is nice to be on the sidelines watching the Cherokee teams warm up because I always catch them smiling.  Some mistake that for a lack of focus.  Trust me, that is not even close.  The Cherokee players are some of the most focused out there.  They are just having fun because they love the game of basketball, and that’s really the most important thing.

Well, it is still chilly outside, but it is technically March so we all know what that means.  This weekend will be dominated with conference tournaments.  There’s too much action to list here so just check ESPN, ESPN2 and ESPNU starting on Friday night for their coverage.