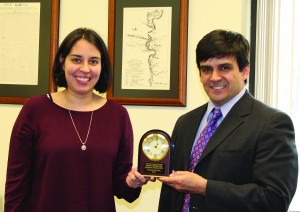 Sarah Wachacha has been named the 2014 recipient of the Hayes Award which is presented annually to an employee of Cherokee Indian Hospital who has led or facilitated a system or process change, resulting in risk mitigation, improved safety or quality improvement and the degree to which the nominee’s actions achieved cross-functional results.

Nominations are based on:

Wachacha was the driving force in the Patient Center Medical Home application and recognition.  She attested for Medical Providers and the hospital to bring in 2.6 million dollars of Meaningful Use money.  Wachacha also participates in ED Flow, PCMH Steering Committee, Flow Team, Pharmacy &Therapeutics, Medical Staff, Health Information Exchange connections with North Carolina, Physician Quality Reporting System, and Patient Portal Contracts.  She was presented with a cash award, a recognition clock and a parking space for a year.