BASKETBALL: FIVE IN A ROW! 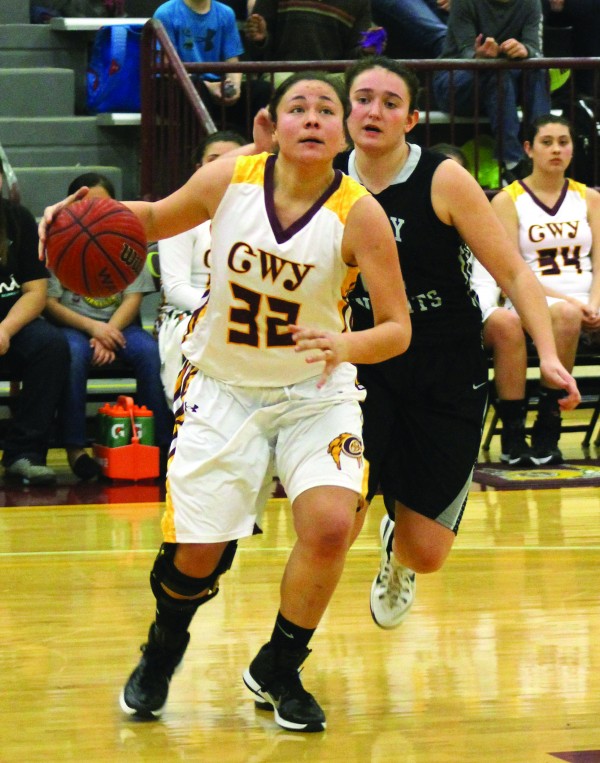 Peri Wildcatt, Lady Braves senior center, drives inside for a layup in the 1A West Sectional Final at home against Robbinsville on Tuesday, March 3. Wildcatt finished the game with eight points and 12 rebounds. (SCOTT MCKIE B.P./One Feather)

“It’s awesome,” said Chris Mintz, Lady Braves head coach.  “You have to give all of the credit to the girls.  They listened to us.  They came out tonight, and they did a great job executing what we wanted them to do.”

Coach Mintz praised the girls for executing their game plan against a tough Robbinsville squad.  “We tried to use some of our size that we have now.  We pounded the ball inside a lot, and we were really successful in being able to do that.”

Robbinsville actually got the first two baskets of the night, but Cherokee came back and scored nine straight to take the lead – one they would never relinquish.  The Lady Braves extended their lead to 17-6 with just over one minute left in the first, and they would lead by ten (19-9) at the end of the period.

The Lady Black Knights scored the first five points of the second period to tighten the ball game up some.  Five minutes into the period, Cherokee led 24-20, but they were able to pull away in the last minute before the half.

Reagan Barnard drilled a three-point shot with 1.6 seconds left in the period to put the Lady Braves up 31-24 at the half.

Robbinsville scored the first four points of the third period to cut Cherokee’s lead to three points, but the comeback was short-lived as Toineeta was fouled while shooting a short jump shot that went in.  She hit her free throw for a traditional three-point play.  Seconds later, Wildcatt caught a pass off a steal and made a layup to put Cherokee up 36-28 at the 5:39 mark of the third.

The Lady Braves kept the pressure up on both ends of the court and led 55-37 at the end of the period.

Both teams were pretty even in the final period with Cherokee outscoring Robbinsville by three (21-18), but their lead was too large and they took the big win 76-55.

To view or purchase photos from this game, visit https://onefeather.smugmug.com/SPORTS/BASKETBALL/LADY-BRAVES-BASKETBALL-201415/Vs-Robbinsville-Sectional/i-SmpXcWF