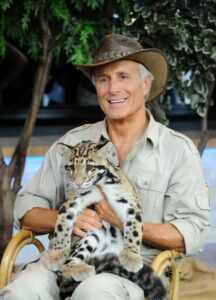 Jack Hanna is bringing his Into the Wild Live show to Harrah’s Cherokee Event Center on Saturday, June 13.

Jack Hanna’s first forray into the lime light came in 1983 with an appearance on Good Morning America to cover the birth of two baby gorillas at the Columbus Zoo. Two years later he made his first of many appearances on the The Late Show with David Letterman, which would lead the way to his first syndicated TV show, “Jack Hanna’s Animal Adventures.” Today, the Daytime Emmy-winning “Jack Hanna’s Into the Wild” takes his family around the globe to discover amazing animals and cultures.

Hanna’s live shows offers viewers a chance to see the animals in person with video and stories from his adventures around the globe.

This event is open to all ages.