The Cherokee Braves football team ended their season on a cold evening in Huntersville in the first round of the state playoffs last month.  Although the season ended with this loss, the Braves rebounded from last year’s 0-10 record to have a competitive season that brings enthusiasm and encouragement for the future.

The senior players provided leadership throughout the season including: Matt Lee, J.J. Benjamin, Brandon Buchanan, Jaron Bradley, Steven Daggs, Nick Hill, Dustin Johnson and Channing Lossiah.  Unfortunately, Buchanan went down with a season-ending knee injury against Andrews.  He was the passing leader in the Smoky Mountain Conference with 1,377 yards and 14 touchdowns.

Buchanan’s injury seriously impacted the team, as he had a great season at quarterback.  Jaron Bradley had an outstanding senior year at defensive end.  Steven Daggs has been a four-year player and had several key hits during the season.  Nick Hill returned to the team this year and played hard and consistent on the line.  Dustin Johnson is a tremendous athlete who made numerous spectacular catches over the season and led the conference in receiving.  Channing Lossiah once again had a solid season.  Matt Lee hit hard and effectively throughout the season.  Transfer J.J. Benjamin brought a new dimension to the team with his speed and explosiveness and led the conference in kickoff returns. 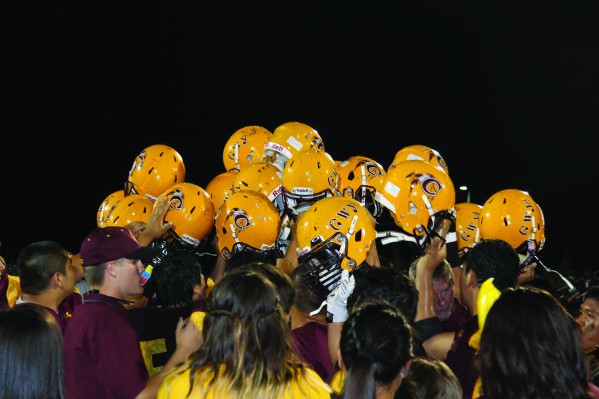 Helmets up! The Braves celebrate with their fans following their victory over Choctaw Central in the annual Battle of the Nations game in September. (SCOTT MCKIE B.P./One Feather)

These seniors returned after a tough 2013 season. They are not quitters and worked hard for the team.  It would have been very easy to quit and give up, but they came back and were able to see success.  These young men will certainly be missed next year, and we wish them the best in their future endeavors.

The future for Braves football looks bright.  The junior class will return Kennan Panther, who led western North Carolina in tackles all season with a total of 190, as well as tying for first place in the entire state for the largest number of tackles recorded.  Also returning is Logan Teesateskie, another great tackler who finished third in western North Carolina for the most tackles, Jason McMillan, Darius Blanton, Taylor Wachacha, Eli and Cain Arch.  Also returning is big Malaki Ramirez and Danny French.  Justin Brady will also return to the field next year.

The support for the Braves this past fall was awesome.  The Braves Booster Club provides major support to Braves athletics.  There are individuals who work their tails off to make events happen.  Special thanks to Buttons Long in the concession, Trista Welch for all her help, Sarah Teesateskie as president of the Braves Booster Club, Mr. Kinsland in the press box, along with all the others up top.  There are many others who work hard – Braves fans know who you are.

The Cherokee One Feather provided outstanding photo shots and coverage all season. Thank you to the One Feather for supporting the Braves.

We are looking forward to more improvement in 2015.  We are proud of our young men.  We appreciate all the Braves fans out there who supported them this fall, and we look forward to a bright future!