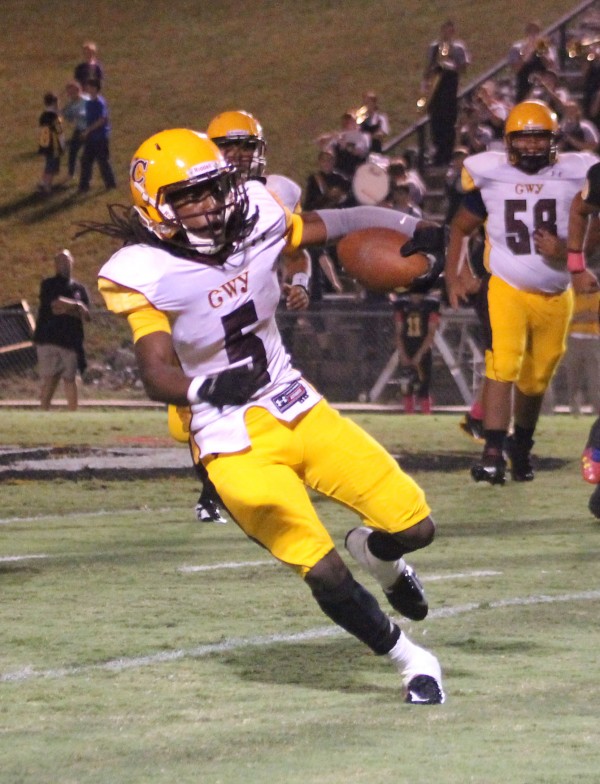 J.J. Benjamin, Braves running back, averaged over 10yds/carry as he rushed the ball 12 times for 133yds and 1 TD. He also caught 2 passes for 34yds and 1 TD. (SCOTT MCKIE B.P./One Feather photos)

MURPHY – It was a tough night for the Braves (3-4) as they traveled to Murphy on Friday, Oct. 3, but J.J. Benjamin, senior running back, ran tough all night long despite the scoreboard which had Murphy on top 56-20.  He averaged over 10yds/carry as he rushed the ball 12 times for 133yds and 1 TD.  Benjamin also caught 2 passes for 34yds and 1 TD.

Turnovers plagued Cherokee in the first half as they lost four fumbles and two interceptions.  Cherokee was able to get two turnovers from Murphy including fumble recoveries by Logan Teesateskie and Kennan Panther.

Panther, the leading tackler in western North Carolina, led the Braves on the night with 11 tackles followed by Jason McMillan and Buchanan with 9 each.

The Bulldogs took advantage of the early turnovers and scored seven times in the first half to take a 49-0 lead into their locker room.  The first half scoring summary is as follows: 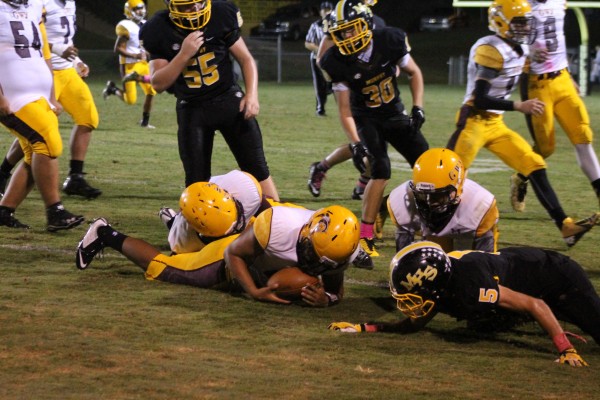 Kennan Panther, the leading tackler in western North Carolina, pounces on a Murphy fumble in the third quarter.

Midway through the third quarter, Teesateskie recovered a Murphy fumble that was caused by Jaron Bradley.  Several plays later, Cherokee would get on the board as Benjamin caught a Buchanan pass down the left sideline for a 31-yard touchdown.  Lloyd Mitchell added the point-after kick and Cherokee trailed 49-7 at the 3:32 mark of the third.

Just a few plays later, Panther both caused and recovered a Murphy fumble, and the Braves were in business again.  This time, Benjamin took it to the house on a 51-yard run.  The point-after failed and Cherokee cut into the lead at 49-13 with 21 seconds left in the third. 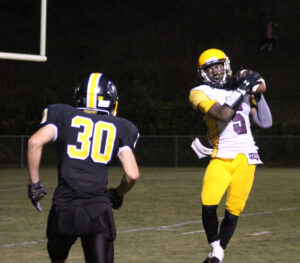 Benjamin goes up high to catch a touchdown pass from Brandon Buchanan in the third quarter.

Cherokee scored again midway through the fourth as Buchanan took it in from 11 yards out following a nice drive by the Braves.  Mitchell added the point-after kick, and Cherokee cut further into the lead at 49-20 at the 6:28 mark of the fourth.

Murphy scored again before the end of the game as George Lampman ran for a 53-yard touchdown.  J.D. Owens added the point-after and Murphy would take the game 56-20.

The Braves have a bye this upcoming week.  They are in action next at home against Swain on Friday, Oct. 17 at 7:30pm for Youth League Night.

To view or purchase photos from this game, visit https://onefeather.smugmug.com/SPORTS/FOOTBALL/FOOTBALL-2014-Cherokee-at/