‘Broadway’s Next Hit Musical’ to feature song, improv, comedy at WCU on Oct. 24 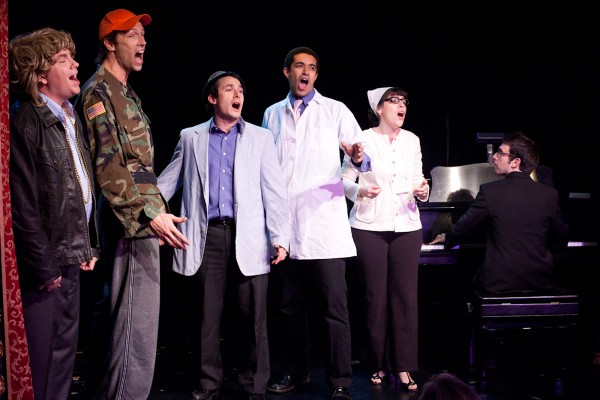 The cast of “Broadway’s Next Hit Musical” is headed to Western Carolina University for a night of song and improvisational comedy Friday, Oct. 24. (Photo by James Shubinski)

The show, part of the Galaxy of Stars Series at WCU, features an award-winning cast from New York City who are masters of improvisation.

“The audience will be amazed — and in stitches — watching this talented cast create a musical right before their eyes,” said Paul Lormand, director of the Bardo Arts Center. “Every song is fresh, every scene is new and every show is different in this totally unpredictable evening of music and comedy.”

Audience participation is a key part of the show. As they arrive at the Bardo Arts Center, each member of the audience is asked to make up a song title and write it down on a slip of paper. In the show’s first act, the actors choose four of the titles in a random drawing and spontaneously perform a song based on each one. Then, in a format modeled after the Tony Awards, the audience votes for a favorite to receive a “Phony” Award. The winning song sets the theme for a musical that is performed in its entirety in the second act. “It’s a full-blown musical complete with memorable characters, witty dialogue and plot twists,” said Lormand.

The cast of “Broadway’s Next Hit Musical” recently performed at the Tribeca Film Festival, the New York Musical Theater and the Triad Theater in New York. In 2007, the cast won the comedy and improv group award from the Manhattan Association of Cabarets and Clubs.

Ticket prices are $21 for adults, $16 for WCU faculty and staff and $7 for students and children. For tickets or additional information, contact the Bardo Arts Center box office at 828-227-2479 or go online to bardoartscenter.wcu.edu.