Cherokee’s defense held the Yellow Jackets to just under 200 total yards on the night including only 22 in the air.  Jaron Bradley led the Braves with 15 tackles followed by Lloyd Mitchell, Kennan Panther (western North Carolina’s current leading tackler) and Will Davis with 13 each.  Mitchell also had a sack.

Brandon Buchanan (#9), Braves quarterback, breaks a tackle during the first half of Friday’s game against Hayesville. He threw for three touchdowns and ran for another to lead the Braves to a 34-14 win. (SCOTT MCKIE B.P./One Feather photos)

The game started out slowly with both defenses playing well early on.  Hayesville turned the ball over on downs on their first possession and Cherokee had to punt following a three-and-out on their first chance with the ball.

Following a Hayesville punt on their next possession, Cherokee took over at their own 36-yard line with just over a minute left in the first quarter.  The Braves began to move the ball as the quarter would draw to a close.

On the second play of the second quarter, Buchanan connected with J.J. Benjamin, Braves running back, on a short pass over the middle.  Benjamin did the rest as he cut across the field and simply outran the Hayesville defenders to the end zone for a 43-yard touchdown.  Mitchell added the point-after kick and Cherokee led 7-0 at the 11:27 mark of the second.

A personal foul on the play against Hayesville was assessed on the ensuing kickoff, and the Yellow Jackets started at their own 24-yard line.  On third down of their drive, Brandon McMillan, Braves cornerback, intercepted a pass and returned it to the Hayesville 30-yard line.

Buchanan ran 11 yards on first down to the Hayesville 19-yard line, but the drive stalled after that and following a sack on third down, the Braves were forced to punt.

Neither team could move the ball for the rest of the half, and the Braves took a 7-0 lead into the locker room. 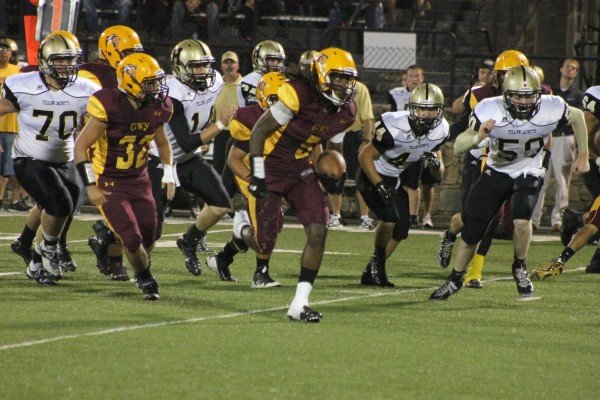 J.J. Benjamin (#5), Braves running back, outruns Hayesville defenders after catching a Buchanan pass en route to a 43-yard touchdown in the second quarter.

Cherokee got the ball first in the second half and set up shop at its own 27-yard line following the kickoff.  Eight plays later, Buchanan hit Dustin Johnson on a 31-yard touchdown strike.  The point-after failed and Cherokee led 13-0 at the 9:27 mark of the third.

Cherokee’s defense held Hayesville to another three-and-out on their next possession and the Braves started from their own 11-yard line following the Yellow Jackets punt.  Cherokee put together a 14-play drive that ate up over five minutes of the clock and culminated in Buchanan hitting McMillan on a 9-yard touchdown pass.  The two-point conversion failed and Cherokee led 19-0 with 2:04 left in the third quarter.

Hayesville turned the ball over on downs on their next possession and Cherokee started at their own 38-yard line.  On first down, Benjamin ran around the left side of the Hayesville defense on a 43-yard run.  An unsportsmanlike conduct penalty against Hayesville for hitting Benjamin out of bounds on the tackle put Cherokee with a 1st and 10 at the Yellow Jackets 14-yard line. 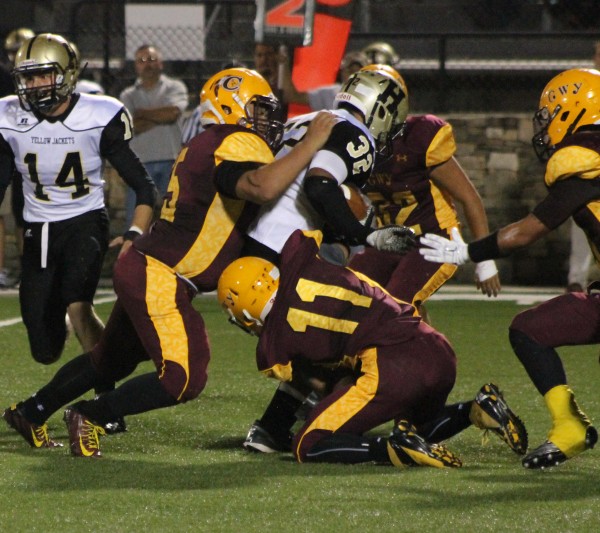 On second down from the 12-yard line, Mitchell ran over several Hayesville defenders on an 11-yard run to the Hayesville 1-yard line.  On the next play, he bulled into the end zone for a touchdown.  Buchanan ran for the two-point conversion and Cherokee led 27-0 with 10:43 left in the game.

Hayesville turned the ball over on downs again on their next possession and Cherokee took over at their own 16-yard line.  Cherokee fumbled the ball on first down but were able to recover it at the 6-yard line.  They gained a few on second down to bring up a 3rd and 14 from the 12-yard line when they fumbled again.  This time, Hayesville’s Will Patterson scooped it up and ran into the end zone for a 10-yard fumble return for a touchdown.  The point-after kick was good and Cherokee led 27-7 with exactly 7:00 left in the game.

Mitchell tried an onsides kick, but Cherokee recovered it at their own 45-yard line.  On first down though, they fumbled the ball again and Hayesville took over at the Cherokee 42-yard line.

The Cherokee defense took over on this possession in which Hayesville had -7 yards of offense and turned the ball over on downs.  Cherokee started in excellent field possession at their own 49-yard line.  Six plays later, Buchanan found the end zone on a 2-yard touchdown run.  Mitchell added the extra point and Cherokee extended its lead to 34-7 with 2:34 left.

Hayesville started their next and final possession at their own 35-yard line and put together a 5-play, 65-yard drive that culminated in a 5-yard touchdown run by Jarod Covington with 31.7 seconds left.  Hayesville added the point-after kick, but it was too late as Cherokee took the victory 34-14.

To view and purchase photos of the Cherokee vs. Hayesville game, visit http://onefeather.smugmug.com/SPORTS/FOOTBALL/FOOTBALL-Cherokee-vs/