The JV Braves (3-1) have won their last two games in dramatic fashion so it should come as no surprise that they got their first loss of the year in an overly dramatic fashion – in four overtimes!  Murphy edged Cherokee 24-18 in the fourth overtime at Ray Kinsland Stadium on Thursday, Sept. 25.

Cherokee got the ball first in the game and moved the ball to midfield before throwing an interception that was returned to the Murphy 33-yard line.  Cherokee’s defense held Murphy to a three-and-out on their first possession and the Braves started their next possession at their own 34-yard line.

The Braves got one first down before the drive stalled causing them to turn the ball over on downs at the Murphy 40-yard line.  Several plays later, Murphy would get into the end zone on a 60-yard touchdown run by the Bulldogs quarterback (a Murphy roster was unavailable).  The two-point try was no good and Murphy led 6-0 at the 8:34 mark in the first quarter. 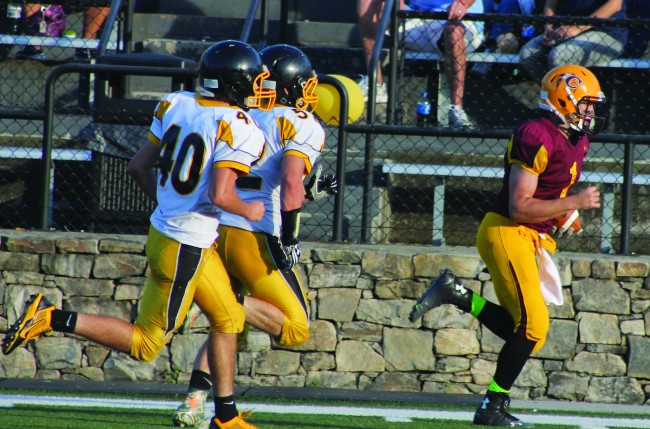 The Braves would strike back very quickly.  George Swayney fielded the kickoff at his own 25-yard line and returned it to the Murphy 49.  On the first play of the drive, Tye Mintz, JV Braves quarterback, took the ball around the left end all the way for a 49-yard touchdown run.  The two-point conversion failed and Cherokee tied the game at 6-6 with 8:01 left in the second quarter.

Neither team was able to move the ball for the rest of the half and the teams headed to the locker room tied at 6-6. 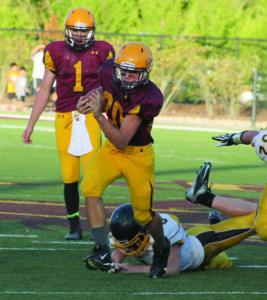 Damion Blanton (#20), JV Braves running back, runs over a Murphy defender during a run in the first half.

Murphy got the ball first in the second half.  Following a nice kickoff return, they started their drive at the Cherokee 49-yard line.  They drove deep in Cherokee territory, but the Braves defense held strong and stopped the Bulldogs on a 4th and 4 at the Cherokee 8-yard line causing Murphy to turn the ball over on downs.

The Braves drove the ball into Murphy territory, but they too eventually turned the ball over on downs at the Murphy 22-yard line.  Murphy turned the ball back over to Cherokee on downs several  minutes later.  And, it went back and forth with both defenses holding strong.

Regulation time would end with the score still tied at 6-6.  For junior varsity game, overtime is played with each team getting the ball at the 10-yard line with four plays to score. 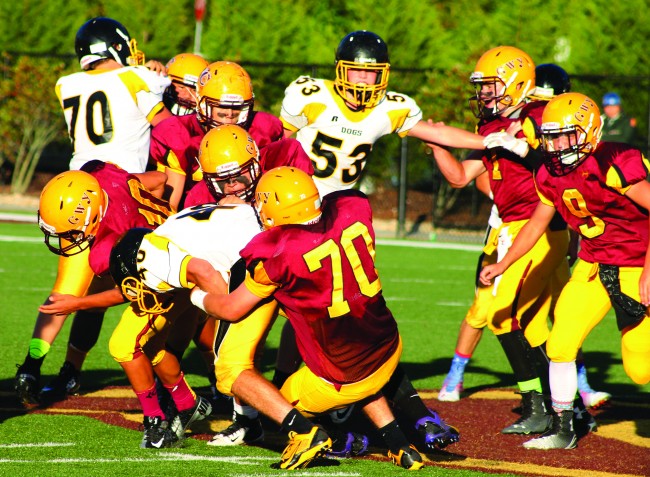 Cherokee wasted no time in the first overtime.  Mintz threw to Wesley Wildcatt for a 4-yard gain to the 6-yard line on first down.  On second down, Mintz broke four tackles on his way to the end zone.  The two-point conversion was no good and Cherokee led 12-6.

Murphy would answer though as their quarterback ran in from one yard out on 4th and 1 to tie the game.  The two-point was no good and the game went to a second overtime tied at 12-12.

Cherokee started again in the second overtime and were stopped the first couple of plays.  On a 3rd and 9 Murphy intercepted a pass.  The Braves needed a defensive stop to save the game and force a third overtime.  That’s exactly what happened.  Cherokee stopped Murphy on a 4th and 1 and the teams went into a third overtime.

The third overtime started rough for the Braves as they fumbled the ball.  But, it was recovered by Swayney at their 21-yard line.  On 2nd and 21, Cherokee pulled some trickeration (it’s a word) as Mintz handed off to Swayney who then threw a 21-yard pass to Holden Straughan who made an incredible one-handed, diving catch in the end zone for a touchdown.  Again, the two-point conversion failed and Cherokee led 18-12.

Murphy would answer as their #40 ran in from one yard out on their third 4th and 1 in a row.  The two-point failed and the game went to a fourth overtime tied at 18-18.

The Braves were unable to move the ball on their next possession, and they were stopped following a 4th and 10.  Then, on first down, Murphy’s #25 ran around the right side for a score to win the game for the Bulldogs at 24-18.

The JV Braves are up for another exciting game as they host Rosman at Ray Kinsland Stadium on Thursday, Oct. 2 at 6pm.

To view and purchase photos from this game, visit https://onefeather.smugmug.com/SPORTS/FOOTBALL/JV-FOOTBALL-Cherokee-vs-Murphy/