Harrah’s Cherokee Casino Resort, along with its employees, raised $5,000 for the ALS Association during the month of September.

Harrah’s Cherokee employees joined in on the national craze to raise money for ALS research with the Ice Bucket Challenge earlier in the month, and the property’s fundraising efforts concluded with a Ducky Dunk Challenge on Saturday, Sept. 20 with more than 800 employees participating. At the Ducky Dunk Challenge, employees wore jeans to work for a donation to the ALS Association, enjoyed food and music, and took the opportunity to dunk senior leadership in a water tank. Guests were also able to participate by making a donation to the ALS Association.

“My sister was diagnosed with ALS 2.5 years ago,” David Norris, Harrah’s Cherokee Casino Resort warehouse technician, said. “She wanted me to tell everyone at Harrah’s Cherokee that she is so grateful for everything we have done here to raise money and awareness about ALS.” 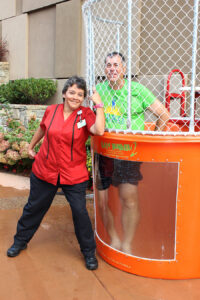 Nationally, donations from the ALS Ice Bucket Challenge recently reached $114 million. Donations came from more than 3 million donors who have contributed since the challenge went viral in late July. The ALS Association, which raised $64 million in all of 2013, has described the influx in funds as “a game changer” for the organization’s efforts.

“We are so proud and blown away by our employees’ efforts to raise money for such a worthy cause,” Brooks Robinson, Harrah’s Cherokee Casino Resort regional general manager and senior vice president, said. “Several of our employees have been personally touched by the devastating disease. These events were a great way for employees to show support for their coworkers and their families.”

ALS was first discovered in 1869, but it wasn’t until 1939 that Lou Gehrig brought international attention to the disease. Ending the career of one of the most beloved baseball players of all time, the disease is still most closely associated with his name. Amyotrophic lateral sclerosis (ALS) is a progressive neurodegenerative disease that affects nerve cells in the brain and the spinal cord.

The ALS Association said in a statement that it would use the recent influx of donations to scale up research into the disease, including a recent pledge of $3.5 million to fund 21 new research projects, and provide more services to people currently suffering from ALS.

For more information about ALS and how you can donate, visit www.ALSA.org