What’s happening at the Fair on Saturday?

The fifth and final day (Saturday) is traditionally known as “Community Day”. Each day of the Fair has its own unique theme. There will be several competitions throughout the day in which community members are welcome to participate.

Gates will open at 11am. The exhibit hall displays, including the Agricultural Extension Office contest entries, Community displays, Veteran remembrance display and Qualla Arts and Crafts Cooperative contest entries will all be available for viewing throughout the day. Carnival rides will be running on schedule for Saturday along with the food and craft booths. 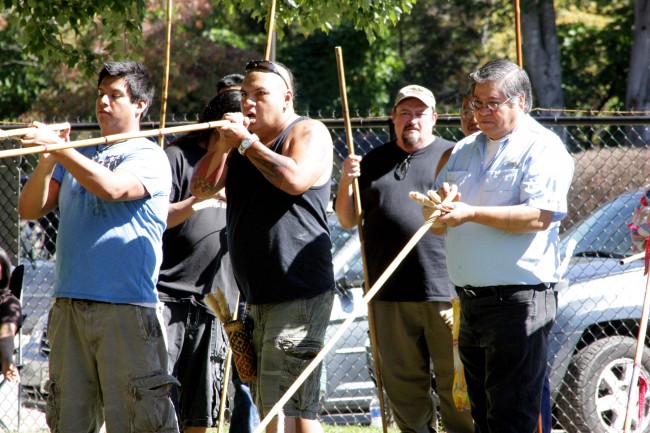 While his competition prepares their darts, Sonny Ledford (center) shoots during a past Fair’s blowgun competition. (DAWN ARNEACH/One Feather contributor)

Raymond Fairchild will take the Amphitheatre stage at noon. Fairchild is a world-renowned bluegrass musician. His accomplishments are several recordings including two gold records, five awards as a champion banjo picker and a performance at the Grand Old Opry that was carried on WSM in Nashville. He was born in Cherokee and regularly performs with his group, the New Maggie Valley Boys, which includes his son, Zane Fairchild, in Maggie Valley. Raymond Fairchild is known for his style of fast, intricate banjo picking.

Crowd favorites, the Rye Holler Boys will sing and play at 3:30 pm. Formed in 2007, RHB has grown from a small local band to recording multiple cd’s and performing at large bluegrass festivals. The band’s interests are simple and stated on their Facebook page, “We love just being country boys, singing old Bluegrass and Gospel music and being friends”. Two Qualla Boundary-based bands will perform at this year’s Cherokee Indian Fair. Cherokee’s Soco Creek will be on stage at 6:00 pm with their unique styling of new country.

At 7pm, the Kingfisher Family Trio, a gospel music group from Tahlequah, Okla. sings for the Cherokee audience. Robbinsville’s FastGear band brings their mixture of country top 20 sounds to the stage. Their sound is a heavy dose of country with a little bit of rock and roll. FastGear performs at 7:45 pm.

The finalist for Cherokee Idol will take the stage on Saturday and a new Cherokee Idol will be crowned. Cherokee Idol is a singing competition where local singers compete for prizes. The Idol competition is always a crowd favorite and the audience participates in the selection of the winners. At press time, the organizer was still accepting applicants for the competition. Those interested in signing up should contact the organizer.  Any amateur singer may contend for the prizes, even a previous Idol winner.

Stage entertainment will conclude with the long standing, all-in-fun Pretty Legs competition. Brave men from around the Boundary compete for prizes and the coveted title of Mr. Pretty Legs by exposing their gams. A gam is defined by dictionary.com as “a person’s leg, especially an attractive female leg”. The theme for this year at the Pretty Legs competition is “It’s Raining Men”. Men in the Pretty Legs competition do their best impression of women and the audience judges who has the prettiest legs. Howard Wahnetah, Fairgrounds and Events Supervisor, suggests that, with the great prize money award in this “pageant”, organizations should sponsor men to compete and raise money for their organization. Exposure at the Fair will also heighten awareness to their causes.

The Cherokee Indian Fair Fireworks Finale will be put on by East Coast Pyrotechnics, a commercial fireworks provider who has presented spectacular fireworks displays for Cherokee, NASCAR, City of Charlotte and the Atlanta Braves. The display will last about 20 minutes starting at 10:45 pm.

Christopher Watty is the organizer for Community Day. He may be reached at 828-554-6490 or chriwatt@nc-cherokee.com. General questions about the Cherokee Indian Fair should be directed to Howard Wahnetah 554-64571 and howawahn@nc-cherokee.com) or Frieda Huskey 554-6492 and friehusk@nc-cherokee.com).