BREVARD – Cherokee (2-3) pulled to within one game of .500 on the season with a 30-19 win at Brevard on Friday, Sept. 19.  Cherokee never trailed in the game and caused four Brevard turnovers to take the key victory on the road.

Brandon Buchanan, Braves quarterback, had another solid game as he went 7 of 18 for 70yds, 1 TD, 1 INT and rushed the ball 11 times for 51yds and 1 TD.  J.J. Benjamin, Braves running back, rushed 10 times for 48yds and 2 TDs.  Channing Lossiah led Cherokee’s receiving corps with 2 catches for 44yds and 1 TD. 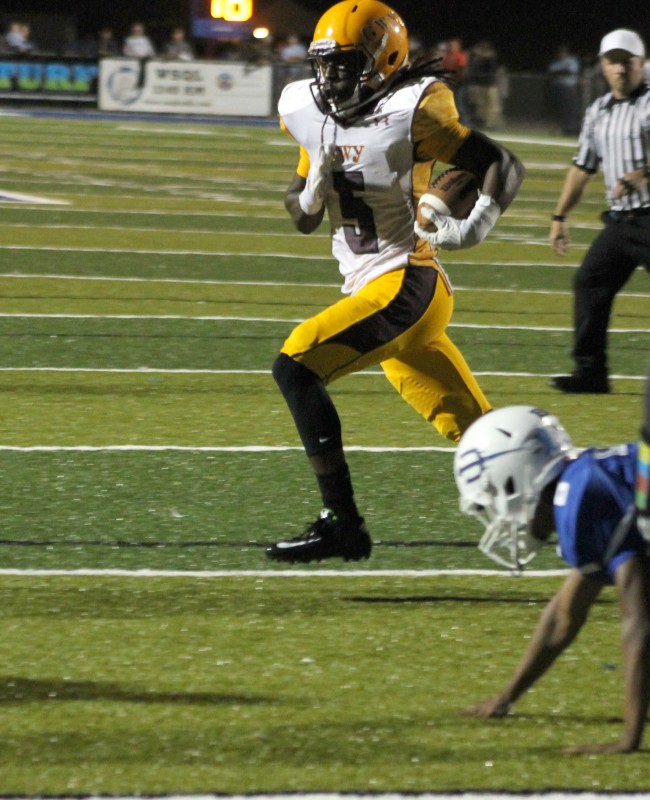 J.J. Benjamin (#5), Braves running back, slides outside on a 5-yard touchdown run in the second quarter of a game at Brevard on Friday, Sept. 19. He scored two on the night as the Braves (2-3) won 30-19 over the Blue Devils. (SCOTT MCKIE B.P./One Feather photos)

Kennan Panther, who is tied for second in all of western North Carolina in tackles, led Cherokee’s defense with 23 tackles in this game.  He was followed by Jaron Bradley and Logan Teesateskie with 12 each.  Panther also recovered a fumble as did Benjamin and Darius Blanton.

Brevard got the ball first in this game, but it was a short-lived possession as Cherokee’s Lossiah intercepted a pass at the Blue Devils 30-yard line just minutes in.  On first down, Benjamin ran to the Brevard 8-yard line.  Several plays later, Buchanan would run in for an 8-yard score.  He followed that with a run for the two-point conversion and Cherokee led 8-0 at the 8:01 mark in the first.

Brevard would start their next possession in a very similar fashion.  Just a few plays into the drive, they fumbled the ball which was recovered by Kennan Panther at the Braves 21-yard line.

A few plays later, Buchanan connected with Lossiah on a 36-yard touchdown pass up the left sideline.  Buchanan hit Blanton for the two-point conversion and the Braves led 16-0 with just 19 seconds left in the first. 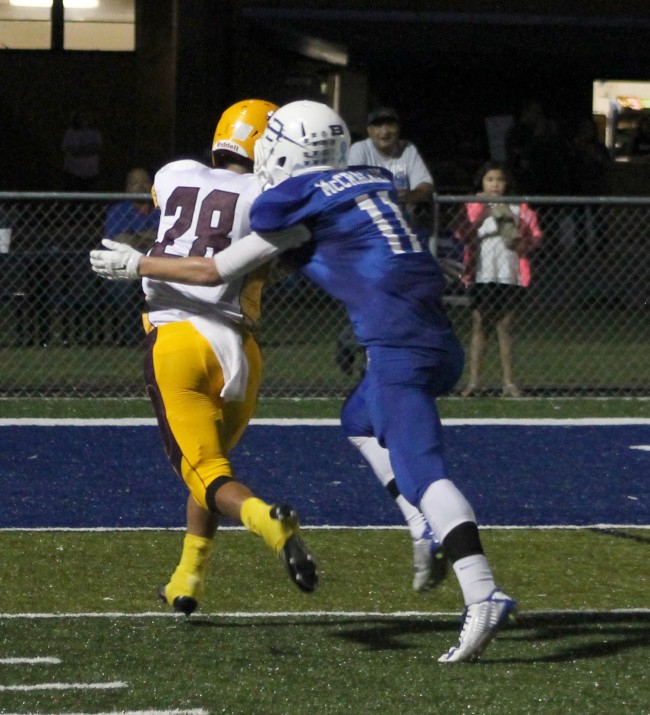 Channing Lossiah (#28), Braves wide receiver, outruns a Brevard defender on a 36-yard touchdown pass from Brandon Buchanan in the waning seconds of the first quarter.

Cherokee got the ball back very soon as Blanton recovered a Brevard fumble on the ensuing kickoff.  The Braves had good field position at the Blue Devils 31-yard line.  Panther had a nice run to the Brevard 16-yard line on first down, but a costly holding penalty negated the play and led to an eventual punt by Cherokee.

Brevard took over at their own 24-yard line and put together a four-minute drive that culminated in a 43-yard field goal by Isaac Bingle with 7:43 left before the half.

Jason McMillan got Cherokee in great field position with a 50-yard return on the ensuing kickoff all the way to the Brevard 30-yard line.  Several plays later, Benjamin ran around the right side of the line for a 5-yard touchdown.  Lloyd Mitchell added the point-after kick and Cherokee led 23-3 with 6:24 left in the quarter.

The Blue Devils would strike back quickly though as they would take the ball following the kickoff and drive 68 yards in under a minute.  Tanner Pettit finished the drive off with a 14-yard touchdown run.  The point-after kick failed and Cherokee led 23-9 at the 5:54 mark.

Cherokee turned the ball over on downs on their next possession, and Brevard took over at their own 19-yard line with just over three minutes left in the half. They drove down the field, and Bingle hit a 38-yard field goal with 1.9 seconds left to make it Cherokee 23 Brevard 12 at the half.

Brevard got the only score of the third quarter as Pettit ran in from 22 yards out at the 7:42 mark.  Bingle added the point-after kick and Cherokee led 23-19.

The fourth quarter opened with Brevard starting at their own 42-yard line following a Cherokee punt.  Cherokee’s defense held them to a three-and-out and forced the Blue Devils to punt.  An errant snap that went way over the punter’s head led to great field position for Cherokee as they started their next possession at the Brevard 26-yard line with 9:15 left in the game.

A few plays later, Benjamin found the end zone on a 3-yard run.  Mitchell added the point-after kick and Cherokee extended its lead to 30-19.

Cherokee held Brevard and forced a punt following another three-and-out.  The Braves weren’t able the move the ball on the following possession, and Brevard took over at their own 21-yard line with 4:51 left.  On the fifth play of the drive, an errant snap was recovered by Benjamin at the Cherokee 27-yard line and the Braves were able to run out the clock to secure the win.

The Braves host Hayesville (2-2) for their Homecoming game on Friday, Sept. 26 at Ray Kinsland Stadium at 7:30pm.  Homecoming festivities will occur during halftime.

To view and purchase photos from this event, visit https://onefeather.smugmug.com/SPORTS/FOOTBALL/FOOTBALL-Cherokee-at-Brevard-9/