Miss Cherokee looks back on year

Miss Cherokee 2013 Madison Crowe has had a full year for sure.  The Mars Hill University senior, who has a double major in art therapy and art education, has juggled her duties as ambassador for the Eastern Band of Cherokee Indians with her responsibilities at school, and she somehow found the time to open a business, Two Crowe’s Ice Cream Parlor, with her brother, Tagan. 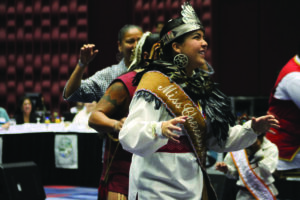 Miss Cherokee 2014 Madison Crowe performs the Cherokee Bear Dance with members of the Warriors of Anikituwah at the opening ceremonies for the Annual USET Meeting held in Cherokee in October 2013. (SCOTT MCKIE B.P./One Feather photos)

“I know that I have served as people’s first impression of Cherokee, and I am honored to have had that privilege.”

One thing she said she has been able to take away from the experience is a sense of togetherness.  “I think it is amazing that, in today’s world, that Native Americans have come together and made a force to be reckoned with…we are standing together as Indigenous people.  We are united.”

Crowe speaks during the groundbreaking ceremony for the new Cherokee Indian Hospital in March.

Attending the Choctaw Fair was one of her fondest memories, and she praised the Mississppi Band of Cherokee Indians for their hospitality.  “They took me in like I was one of their own.  I had a traditional meal at a house of people that we didn’t know, but they invited us to come and eat with them…they were all really welcoming.”

In her time as Miss Cherokee, Crowe has made it her purpose to educate as many as she can about the Tribe and American Indian people in general.  “I got to talk about what it means to be a matrilineal society.”

She has been proud to be able to share the Cherokee language with others.  “After I speak, people come up and say, ‘that was beautiful, your language is beautiful.’”

During her reign, Crowe has had the opportunity to meet many interesting people including lots of dignitaries and leaders from throughout Indian Country.  At last October’s annual USET meeting, held in Cherokee, she was excited to have met NCAI president Brian Cladoosby as well as Oneida Nation Rep. Ray Halbritter. 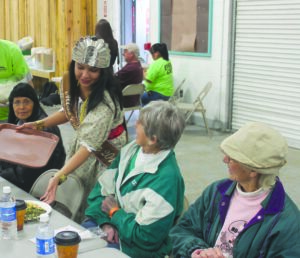 Crowe serves dinners to elders at the annual Rainbows and Ramps Festival in Cherokee in March.

Crowe will crown Miss Cherokee 2014 during the upcoming pageant on Saturday, Oct. 4 at 6pm in the Chief Joyce Dugan Cultural Arts Center.  When asked what advice she would give to the next Miss Cherokee, she related, “Take in every moment and absorb the information that you hear.”

She added, “Don’t think that just because you have a crown on your head that you lose your voice as a person and a Native American.  Don’t let the crown hold you back from anything that you believe in.  Stay strong.”