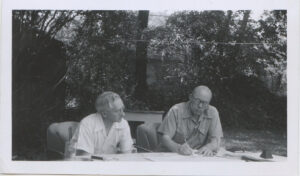 Harvey Broome, left, and Howard Zahniser working on one of the 17 drafts of the Wilderness Act. (NPS photos)

The Wilderness Act provides for the protection of lands “untrammeled by man” and “retaining its primeval character and influence, without permanent improvement or human habitation.” Over 109 million acres are currently protected as wilderness areas in 44 states.

“We are glad to be a part of recognizing and honoring the visionaries behind the Wilderness Act, many of whom roamed and found inspiration in the Smokies,” said Acting Superintendent Clay Jordan.

A hiker enjoys the view from Chimney Tops.

The day’s events will take place in the Sugarlands Visitor Center theater, from 9:30a.m. – 2p.m. In addition, the Smoky Mountains Hiking Club will lead a strenuous day hike to Silers Bald on Sunday, Sept. 28. All the activities are free and open to the public.

Ed Zahniser retired in June 2013 as the senior writer and editor with the National Park Service Publications Group in Harpers Ferry, West Virginia. He writes and lectures frequently about wilderness, wildlands, public lands, and conservation history topics. Ed’s father, Howard Zahniser, was the principal author and chief lobbyist for the National Wilderness Preservation System Act of 1964. Ed edited his father’s Adirondack writings as “Where Wilderness Preservation Began: Adirondack Writings of Howard Zahniser” and collaborated with his sister, Karen Z. Bettacchi, to edit their mother’s journal of five wilderness car-camping trips that the family took in 1956 in “Ways to the Wilderness.”

8:30 a.m.         The Smoky Mountains Hiking Club will be lead a hike from Clingmans Dome to Silers Bald. This scenic portion of the Appalachian Trail is part of the famous 1966 “Save Our Smokies Wilderness” hike led by Harvey Broome and others, during which more than 500 hikers came to or passed over Silers Bald. The return will be on the same trail with a strenuous, steady climb gaining around 1,200 feet in elevation. Only those prepared with proper clothing and in excellent physical condition should attempt this hike. Meet at Sugarlands Visitors Center in the west side parking area near the restrooms.