What’s happening at the Fair on Friday?

The fourth day (Friday) is traditionally known as “Veteran’s Day”. Each day of the Fair has its own unique theme. All men and women who are veterans, active duty military and reservists have free admission on this day. Gates will open at 11am with music for the Amazing Grace gospel singers followed by the Birdtown Crossing drum group (during 11:00 hour, the veterans will be treated to lunch). A veteran’s ceremony will begin at 12pm with the presenting of colors (flags) by Steve Youngdeer American Legion Post 143 veterans. Principal Chief Michell Hicks will then speak to veterans and attendees. His address will be followed by one from Post 143 Commander Lewis Harding who will share his thoughts with the crowd.

The American Eagle Foundation will return to the amphitheater stage. This is a non-profit organization based in Pigeon Forge, Tenn. that has made its mission to protect and preserve the American Bald Eagle for over a quarter of a century. In previous years, the Foundation has provided an entertaining and exciting educational demonstration of the eagle and other birds of prey. 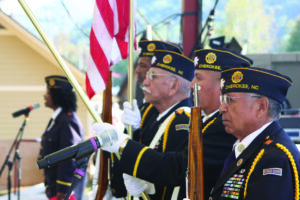 Since World War II, USO troupes and shows have been bringing a touch of home to U.S. military men around the world. With song, dance and comedy routines, the performers would try to sooth our troops, calming fears and helping ease pain. The USO Liberty Belles return to Cherokee to thank our veterans, active and reserve personnel for their service and sacrifice. The world class entertainment of the Belles will take the stage at 1:30 pm and 7:30 pm.

Captain Robert K. Rambo is a professional re-enactor who will perform on Friday. Captain Rambo has presented hundreds of performances combining historic Cherokee cultural speeches with one man show theatrics to provide a unique rendition.

The exhibit hall displays, including the Agricultural Extension Office contest entries, Community displays, Veteran remembrance display and Qualla Arts and Crafts Cooperative contest entries will all be available for viewing throughout the day. Carnival rides will be running on schedule for Friday as will be the food and craft booths.

The will be two men’s stickball games on Friday; one at 3pm and again at 5pm.

The annual remembrance of Private First Class Charles George will be observed at the Fair. PFC George was killed in action on Nov. 30, 1952 near Songnae-dong, Korea. He was posthumously awarded the US Army Medal of Honor for his bravery in battle, particularly in covering a live grenade that threatened to kill his fellow soldiers. The action cost him his life.

The evening will begin pageantry of the Teen Miss Cherokee competition. The battle for the crown will start at 6:30 pm. Competition includes traditional clothing and talent competitions.

Emotions ran high last year as the veteran’s ceremony closed with the video presentation of the “Angel Flight”. Angel Flight is designation used by the military for the plane and mission of returning the soldiers killed in battle to their home.  Post 143 Service Officer Warren Dupree will read the names of all Cherokee service persons killed in action, tolling a bell after each name. The ceremony will conclude with the playing of “Taps”.

At 9pm, “Nuthin’ Fancy” cranks up the sounds of Lynyrd Skynyrd as this tribute band helps us relive the early 1970’s on stage at the amphitheater. The band from Tampa, Fla. will be performing great classics like “Sweet Home Alabama”, “Simple Man” and “Freebird”. Nuthin’ Fancy recreates the look, feel and sound of a Lyrnyrd Skynyrd concert.