There were two lead changes, two touchdowns, an interception and a fumble all in the final two minutes of the game as the Cherokee JV Braves (2-0) hosted Robbinsville at Ray Kinsland Stadium on Wednesday, Sept. 10.  Isaiah Evans, JV Braves running back, caught a Tye Mintz pass and took it 39 yards to the house for the game-winning score with 36 seconds left in the game to give the Braves a 32-28 win. 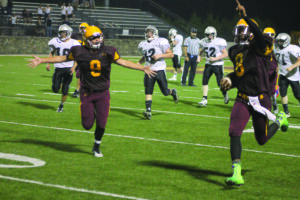 Isaiah Evans (#8), JV Braves running back, runs into the end zone for the game-winning score on a 39-yard touchdown pass from Tye Mintz with 36 seconds to go in Wednesday’s home game against Robbinsville. Cherokee won the game 32-28 to improve to 2-0 on the season. (SCOTT MCKIE B.P./One Feather photos)

“It was a crazy game,” said JV Braves head coach Chris Mintz.  “For us to play so badly in the first half and then come out in the second half and turn everything around, they never quit.  They had a chance to hang their head, but they didn’t.  Our defense didn’t play so well in the first half, but they stuck to it and starting making some plays and got some turnovers, and then we started really moving the ball on offense.”

Robbinsville came out firing at the beginning of the game and took the opening kickoff, drove down the field and Ian Wiggins capped it off with an 8-yard run.  He followed that up with a run for the two-point conversion and Robbinsville led 8-0 less than two minutes into the game.

Cherokee had a three and out on their first possession, and they punted to the Black Knights who took over at the Cherokee 44-yard line.  Cherokee’s defense held Robbinsville on this possession which included a sack by Braves’ linebacker Holden Straughan to force a punt.

Evans dropped back to receive the punt for Cherokee.  He caught it at the Cherokee 28-yard line, dodged several tacklers and then simply outran the field en route to a 72-yard touchdown return.  Mintz ran in for the two-point play to tie it at 8-8 with 3:54 left in the first quarter.

Robbinsville started their next possession at their own 46-yard line and began to drive.  After several runs, they worked their way deep into Cherokee territory.  But, it was not to be as the Robbinsville running back coughed up the ball which was recovered by an alert George Swayney, JV Braves cornerback, at the 2-yard line.

Holden Straughan (#23), JV Braves linebacker, falls on a fumble that he caused in the waning minutes of the game that set up the winning score for Cherokee.

Cherokee was unable to move the ball and punted out of their end zone after a three and out.  Robbinsville got the ball back at the Cherokee 40-yard line and took advantage of the short field.  Several plays later, Robbinsville’s Bridges (#2) ran it in from one yard out.  The point-after try failed and Robbinsville led 14-8 at the 7:28 mark in the second.

Cherokee was still unable to move the ball, and was forced to punt.

On the Black Knights next possession, Bridges would add his second score of the game with only 47 seconds left in the half.  Again, the two-point conversion failed, and Robbinsville took a 20-8 lead into the locker room.

The Braves received the ball first in the third quarter, but fumbled the ball to the Black Knights midway through the quarter.  Several plays later, Robbinsville had a 71-yard pass play that ended in disappointment for them as the receiver was stripped of the ball by Evans just prior to the goal line.

Cherokee took over at its own 20-yard line, but was unable to move the ball and had to punt.  On first down for Robbinsville, Evans stripped the ball from the Black Knights running back and Mintz picked it up and ran 53 yards for the touchdown.  Mintz passed to Swayney for the two-point conversion and Cherokee cut into the lead and only trailed 20-16 with 1:24 left in the third. 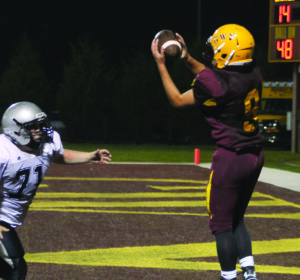 George Swayney (#9), JV Braves wide receiver, catches a pass in the end zone for a two-point conversion in the third quarter.

Robbinsville turned the ball over on downs on their next possession, and Cherokee took over at its own 35-yard line.  On the first play of the drive, Mintz kept the ball and jaunted right up the middle for a 65-yard touchdown run to give the Braves the lead.  Evans ran in for the two-point conversion and Cherokee took the lead 24-20 with 8:55 left in the game.

The Black Knights took over on their own 44-yard line following the kickoff and began an almost six minute drive that culminated in a 5-yard touchdown run by Bridges.  The two-point conversion was good, and Robbinsville took back the lead 28-24 with 1:54 left in the ballgame.

Then, the game got really interesting.

Cherokee started on its own 39-yard line following the kickoff.  On second down, Robbinsville intercepted a pass and returned it to the Robbinsville 48-yard line.

Things looked bleak for the Braves, but Straughan had a different thing in mind.  On the next play, he literally jumped over the center and smashed into the quarterback who fumbled the ball which was recovered by Straughan at the Robbinsville 36-yard line.

Cherokee lost yardage on first down and couldn’t do anything on second or third down.  So, on 4th and 12 from the 39-yard line, Mintz connected with Evans who darted through three Robbinsville defenders and then sprinted into the end zone for what would be the game-winner with 36 ticks left on the clock.  Mintz ran in for the two-point conversion to make it 32-28 in favor of the Braves who remained unbeaten.

The JV Braves travel to Swain on Thursday, Sept. 18 at 6pm.