MARS HILL – Representatives from Mars Hill University and the Eastern Band of Cherokee Indians signed a renewal agreement on Tuesday, Sept. 9 solidifying and renewing the cooperative relationship between the two organizations.

Dr. Dan Lunsford, president of MHU, and Principal Chief Michell Hicks signed ceremonial versions of the agreement in both English and Cherokee. The agreements signed will be framed and displayed on the Mars Hill campus and in the tribal offices in Cherokee. 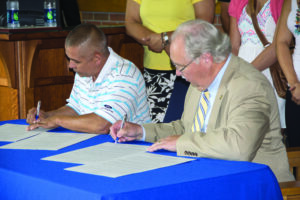 According to Dr. Lunsford, the purpose of the agreement is, first, to enhance educational opportunities for students who are members of the Eastern Band to come to MHC.  Secondly, the agreement includes important components which call on the Tribe for input regarding historic collections at the university related to Native American history.

Dr. Lunsford said those collections include “significant artifacts and documentation of the great contributions of the Eastern Band of Cherokee Indians to the region.”

Chief Hicks said he appreciated the relationship of friendship with both Dr. Lunsford and with Mars Hill University.  He said the EBCI supports education for its young members, spending about $3.5 million in North Carolina annually for educating Cherokee students.  That money goes toward the arrangement with Mars Hill, as well as other, similar arrangements with universities throughout the state.

“We want to keep working hard so that these young folks can have the best opportunities that we can put in front of them,” he said.  “There’re still a number of areas within the Tribe that we have voids, whether it’s doctors or architects or accountants or lawyers, etc.  And, we want to make sure that we do the best we can to fill those gaps, so that as we move forward as a Tribe, those services and that need for expertise is filled.”

The agreement, which was originally signed in February 2011, calls for the Tribe to take an active role in continuing to provide advice and consultation for various historic events and presentations at the university.  It also calls for a cooperative effort to provide comprehensive scholarship funds for all members of the EBCI who qualify academically, and who choose to attend Mars Hill University.

Updates to the agreement this year allow for more flexibility in granting financial aid to students attending Mars Hill who are members of EBCI than did the original document  Further, MHU will offer a $20,000 grant annually for any approved EBCI student(s) recruited to any of MHU’s athletic teams.