BRAVES WIN BATTLE OF THE NATIONS 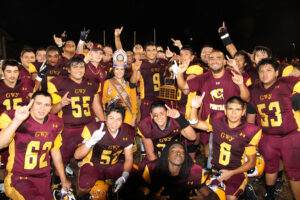 The Cherokee Braves hoisted the Battle of the Nations trophy and broke their losing streak, which dated back to 2012, in one fell swoop on Friday, Sept. 5.  Braves quarterback Brandon Buchanan connected with Darius Blanton on a 38-yard touchdown pass, capping off a 97-yard game-winning drive, with 2:07 left in the game to give Cherokee the 26-21 win over the Choctaw Center Warriors.

Choctaw actually had more official total yards in the game with 341 to Cherokee’s 243, but that doesn’t tell the whole story.  Cherokee had three long touchdown plays called back for penalties including a run by Buchanan, a pass play from Buchanan to J.J. Benjamin, and a 70-yard kickoff return for a touchdown by Benjamin.

Cherokee’s defense played strong all game long, and Kennan Panther led the Braves again this week with 15 tackles followed by Jaron Bradley with 14.

Cherokee’s first possession of the game stalled, and they were forced to punt.  Choctaw took over on its own 32 and the Braves’ defense held them to a three and out.  An errant snap on the punt attempt allowed Cherokee to tackle the punter and take over on the Choctaw 21-yard line.

Several plays later, Benjamin ran in from five yards out for the first score of the game.  Buchanan threw to Jason McMillan for a successful two-point conversion and Cherokee led 8-0 at the 6:57 mark of the first quarter.

Choctaw began to drive the ball on their next possession, and Bryce Billy topped it off with a 1-yard touchdown run of his own.  The two-point conversion failed and Cherokee led 8-6 with 1:45 left in the first.

Billy added another 1-yard touchdown run at 4:30 in the 2nd quarter.  Derald Isom ran in for the two-point conversion and Choctaw took a 14-6 lead into the locker room.

J.J. Benjamin (#5), Braves running back, breaks a tackle en route to a 5-yard touchdown run in the first quarter.

Choctaw got the ball first in the second half, but that was short-lived as Steven Daggs forced a fumble that was recovered by Bradley at midfield.  Cherokee took advantage of the short field and began to move the ball.

Following an 18-yard run by Buchanan to the 1-yard line, Lloyd Mitchell smashed his way into the end zone to tie the game.  The two-point conversion failed and the game was tied at 14-14 at the 7:39 mark in the third quarter.

Cherokee held the Warriors to a three-and-out on their next possession, and Choctaw was forced to punt.  During the punt play, Choctaw received a 15-yard penalty for running into the Cherokee receiver after he called a fair catch.  The Braves set up shop at the Choctaw 40-yard line.

Benjamin had a nice run on first down to the Choctaw 20.  Then, Buchanan connected with Channing Lossiah on an 18-yard pass to the Choctaw 2.  Several plays later, Buchanan ran it in for a touchdown from one yard out to give Cherokee the lead.  The two-point conversion failed and Cherokee led 20-14 at the 4:43 mark in the third quarter.

Choctaw didn’t trail for long though.  Following the kickoff, they took over at their own 16-yard line.  Several plays later, Brandon Kennedy threw a 79-yard touchdown strike to Jeremiah Robinson.  The point-after kick was good and Choctaw took a one-point lead at 21-20 with 2:49 left in the third. 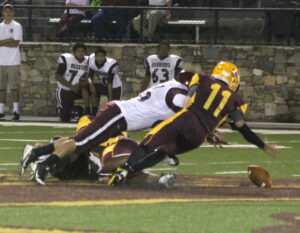 Jaron Bradley (#11) jumps on a fumble, caused by Steven Daggs, early in the third quarter.

Both teams were forced to punt on their next possessions.  At the 9:28 point in the fourth, Cherokee took over at their own 17-yard line following a Choctaw punt.

Several plays later, the Warriors got the ball back as Dayton Bell intercepted a pass and returned it to the Cherokee 30-yard line.  Cherokee’s defense stepped up though and forced another Choctaw punt.

Choctaw had very good coverage on their punt and pinned the Braves at their own 3-yard line with 6:01 left in the game.  The drive started.

Cherokee was on a roll getting first down after first down and eating up 10, 12 yards at a time.  One big play during the drive saw Buchanan stopped after a modest gain, but he wouldn’t quit and literally pushed the entire pack another 10 yards down the field for a Braves first down.

Several plays later, Buchanan connected with Blanton on the 38-yard touchdown pass to give the Braves a 26-21 lead and the Battles of the Nations win.

Choctaw did get the ball back on their own 30-yard line, but the Braves’ defense was having none of it and stopped them cold to secure the win.