The Lady Braves (2-2) evened their season record with a 3-1 home win over the Highlands Lady Highlanders at the Charles George Arena on Tuesday, Sept. 2.  Cherokee lost the first game of the match, but came back strong to win the next three and take the match.

Hye Long (#26) and Kyleigh Wiggins (#27) go up for a block on Highlands outside hitter Courtney Henry during Tuesday’s home match in which Cherokee won 3-1. (SCOTT MCKIE B.P./One Feather photos)

The first game of the match started out evenly, but Highlands began to pull away due to several passing errors by the Lady Braves.  The Lady Highlanders extended their lead to 19-10.  Courtney Henry served the next five points to make it 24-11.

Lady Braves outside hitter Sarai McMillan got a kill on the next point to keep Cherokee alive at 24-12, but Highlands got the following point to take the first game 25-12.

Game two started out much the same as the first one and Highlands jumped out to a 14-9 lead when Lady Braves head coach Terri Hogner called a timeout.  It was fruitful as the Lady Braves won the next point and began their comeback.

Through strong serving by Kyleigh Wiggins, Kaycee Lossiah and Macie Welch, the Lady Braves fought their way to even at 20-20.  Welch served two more and the Lady Braves led 22-20 before Highlands middle hitter McKayla Hensley got a kill to make it 22-21.

Wiggins followed that up with a kill of her own to give Cherokee a two-point lead at 23-21.  Kristen Driver got a nice dink shot on the next point to make it 24-21, but Highlands wasn’t finished as Henry got a nice kill to make it 24-22. 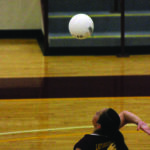 The game, which was exciting going down the stretch, ended in an undramatic fashion as Highlands had a service error on game point and Cherokee won 25-22.

Game three was almost identical except the game ended on a hitting error by Highlands as the Lady Braves won 25-22 and took a 2-1 lead in the match.

Game four began with service errors on both sides, but Wiggins got a nice serving ace to give Cherokee a 3-2 lead – one they would not relinquish.

McMillan served seven straight points and the Lady Braves were rolling at 17-8.  Several points later, Wiggins got a monstrous roof block that ignited the entire arena and gave Cherokee a 21-12 lead.

Individual stats were not available for these matches.