TAHLEQUAH, Okla. — The Cherokee Nation honored 16 citizens and four community organizations who made significant contributions over the past year during the recent 2014 State of the Nation Awards Banquet.

“Our 2014 awardees all exemplify the values that we hold dear as Cherokee people and they advance our culture in their respective disciplines,” said Cherokee Nation Principal Chief Bill John Baker. “Each and every one of these honorees deserves our deepest respect and gratitude. Their positive influence propels us all, as Cherokee people, forward.”

John Ross Jr., of Fort Gibson, who works for the tribe doing projects to translate Cherokee onto products for Microsoft and Google, was named a Cherokee National Treasure.

“I am really honored to be able to speak the language and preserve it for the tribe,” Ross said. “That’s my goal, to preserve it and teach it to the children so they too can preserve the language through speaking, reading and writing our native language.”

All honorees received a medal and plaque, and the four veterans also received a United States flag flown over the U.S. Capitol building from U.S. Rep. Markwayne Mullin.

The 2014 State of the Nation Awardees are as follows: 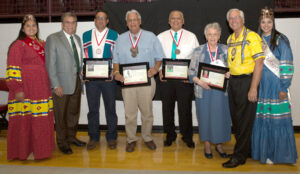 John Ross Jr., for preserving the Cherokee culture and language. Ross serves as chairman of the Ethnobotony Publications board, which focuses on Cherokee cultural-environmental issues. He serves on the Cherokee Elders Council and received the Perry Aunko Indigenous Language Preservation Award from the Greater Tulsa Area Indian Affairs Commission.

David Comingdeer, of Stilwell, Okla., for his skilled crafting of stickball sticks. The sticks are made by hand from hickory wood. He is a member of the Echota Ground, where he holds the seat of head chief.

Clesta Manley, of Claremore, Okla., for sharing Cherokee culture and art with the Indian Women’s Pocahontas Club where she encourages members to learn more about history and culture. She has juried shows at Gilcrease and Philbrook art museums and received a grant to paint in Italy from University of Tulsa Art Department.

Eddie Morrison, of Tahlequah, Okla.,for his contemporary sculpting work in wood and stone. His work sculptures are often created of red cedar and Kansas limestone. His works are featured at the Department of Interior building in Washington, D.C., and throughout the country.

Keith Harper for serving as the U.S. Representative to the United Nations Human Rights Council. He is the first member of a federally recognized tribe to serve at the U.S. Ambassador level.

Stacy Leeds, of Fayetteville, Ark., for her work in Native American law. As dean at the University of Arkansas School of Law, Leeds is the only Native American law school dean in the United States. She was also the first woman to serve as a justice on the Cherokee Nation Supreme Court.

Daryl Legg, of Sallisaw, Okla., for his work in pioneering the Cherokee Nation Coming Home program, which is designed to improve the outcomes and reduce cases of repeat offenses among former prisoners. Legg was honored by the White House as a Champions of Change awardee on June 30, 2014. 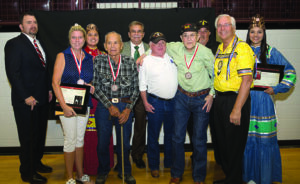 Joseph Fourkiller, of Stilwell, Okla., for his service in World War II. The U.S. Navy veteran received numerous awards including the Asiatic-Pacific Campaign Medal with a Bronze Star, the World War II Victory Medal and the Philippine Presidential Unit Citation-Foreign.

Cooie Meigs, of Park Hill, Okla., for his service in World War II. The U.S. Marine Corps veteran received the Silver Star and two Purple Hearts for his service.

Robert Whisenhunt, of Carmichael, Calif., for his service in World War II. The U.S. Army veteran landed in Normandy on June 7, 1944, the day after D-Day. Whisenhunt received too many injuries during intense fighting and was given an honorable discharge in July 1945. 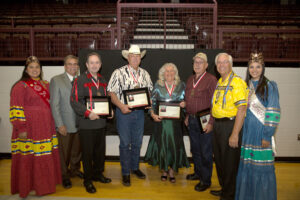 Tom Brandon, of Liberty, Mo., for his work helping the American Indian community in Kansas City, where he helped organize the first Cherokee history course and was a founding member of the Cherokee Community of Kansas City.

J.R. Sellers, of Tahlequah, Okla., for his work in Tri-Community W.E.B. Association, an organization that connects the Cherokee County communities of Welling, Eldon and Briggs. He led efforts to build a community building for residents of those communities.

Neighborhood Association of Chewey, located in Adair County, for striving to strengthen its community through programs focused on sustaining Cherokee heritage, culture and values.

Tri-Community W.E.B Association, located in Cherokee County, for serving the three communities through a variety of services.