CULLOWHEE – Thousands gather on the Western Carolina University campus in Cullowhee each year on the last Saturday in September to be a part of the region’s rich history of mountain culture at Mountain Heritage Day. This year, those attending on Saturday, Sept. 27, can be part of history by just being there, as the festival marks both its own 40th anniversary and the 125th year of the university that hosts it.

The event began as Founders’ Day on October 26, 1974, at the inauguration ceremony of Chancellor H.F. Robinson. It became known as the annual Mountain Heritage Day the following year.

This year, multiple Grammy Award-winning David Holt of Fairview – one of the musical performers from the early years of the event – will be making a return appearance with WCU alumnus Will McIntyre. Holt has recorded with mentors whose listed names read like a “Who’s Who” of bluegrass, folk, country and blues artists. He and McIntyre, once a student photographer with WCU’s public relations office and now a professional photographer, have performed together in several countries.

Two exhibits in the free-admission Mountain Heritage Center, located in the nearby H.F. Robinson Building, celebrate 125 years of university history and 40 years of Mountain Heritage Day. The university began in a one-room schoolhouse, from which four women and one man graduated three years later. Artifacts ranging from photographs and commencement programs to cheerleader, sports team and mascot uniforms tell the school’s story as it grew. The festival’s exhibit commemorates long-gone events like candidate stump speeches, moonshine-sniffing and tobacco-spitting. 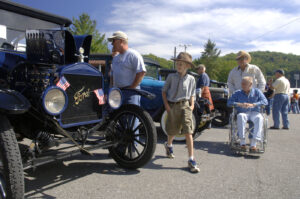 Duncan LeMay, of Cullowhee, walks around and admires a 1923 Ford Touring during the antique car show during the 2013 Mountain Heritage Day Festival on Saturday.

Punctuating the day’s sounds will be the report of black powder rifles, the rhythm of a logger’s mule engine, the clang of a blacksmith’s hammer and the slide of a shuttle through a loom.

Because the campus is located in Cullowhee, land of the legendary giant Judaculla, local Cherokee arts and culture will be celebrated by the Tsa-la-Gi Touring Group as well as games of 11-man Hummingbird team stickball.

The tempting fragrances of festival foods – from traditional to historic to ethnic, offered by vendors in trucks and booths – will blend in the fresh mountain air.

Other traditions that will not change include free admission and free parking. Visitors are encouraged to bring a blanket or chair, and an umbrella to shed unwanted sunshine or rain. Service animals are welcome, but guests are asked to leave pets at home.