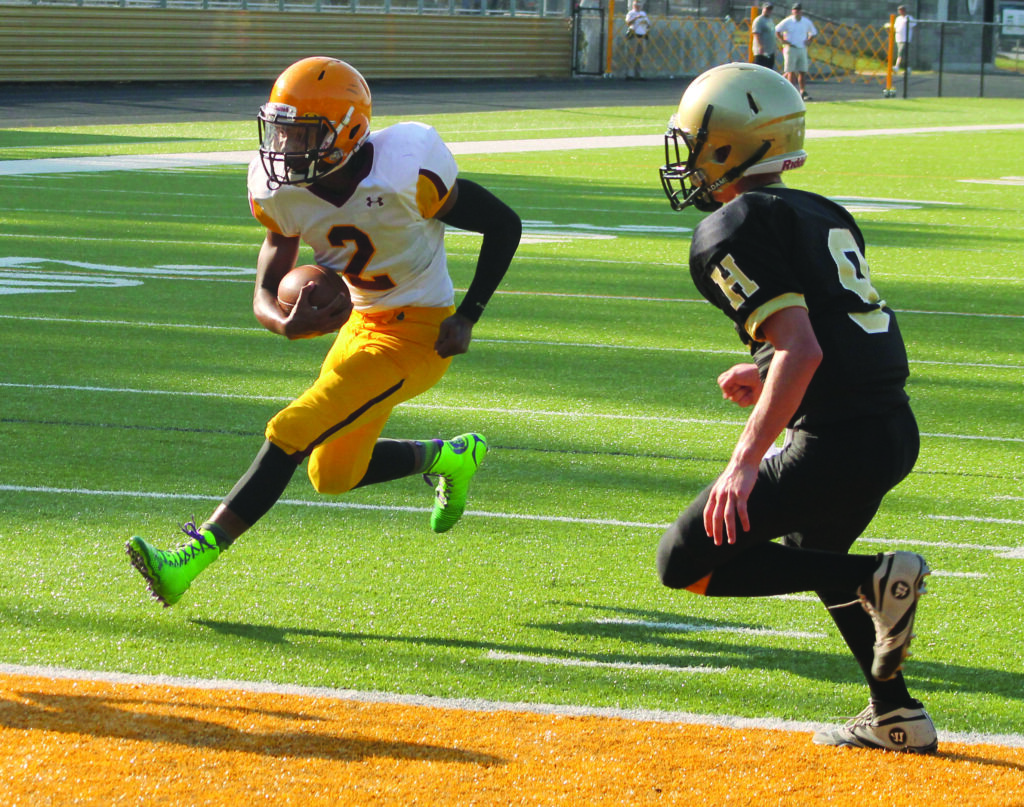 HAYESVILLE – The JV Braves (1-0) started out their 2014 season with a bang as they traveled to Hayesville on Thursday, Aug. 28 and came back with a 28-0 shutout win.

“It’s been awhile since we’ve won,” said JV Braves head coach Chris Mintz.  “These guys worked really hard, and they believe in what we do.  They are in there every day working their tails off, and their hard work is showing.  They had a good game.”

He said one of the keys to their victory was a strong defense.  “We shut them down all game long and combined that with some big plays on offense.”

JV Braves quarterback Tye Mintz had a good game with one touchdown pass, a 60-yard bomb to Wesley Wildcatt, as well as two long runs (40, 56) that set up Cherokee scores.  Running back Isaiah Evans had a huge game scoring two touchdowns on runs of 14 and 91 yards respectively.

Cherokee’s defense played well the entire game pitching the shutout.  And, in fitting fashion, Seth Sneed intercepted a Hayesville pass on the final play of the game.

The Braves got things going early in this matchup as they marched down the field quickly in the first quarter.  Tye Mintz broke a 40-yard run on a quarterback keeper that brought it to the Hayesville 9-yard line.  Following a penalty, Evans took the ball in from 14 yards out for the first score of the game. 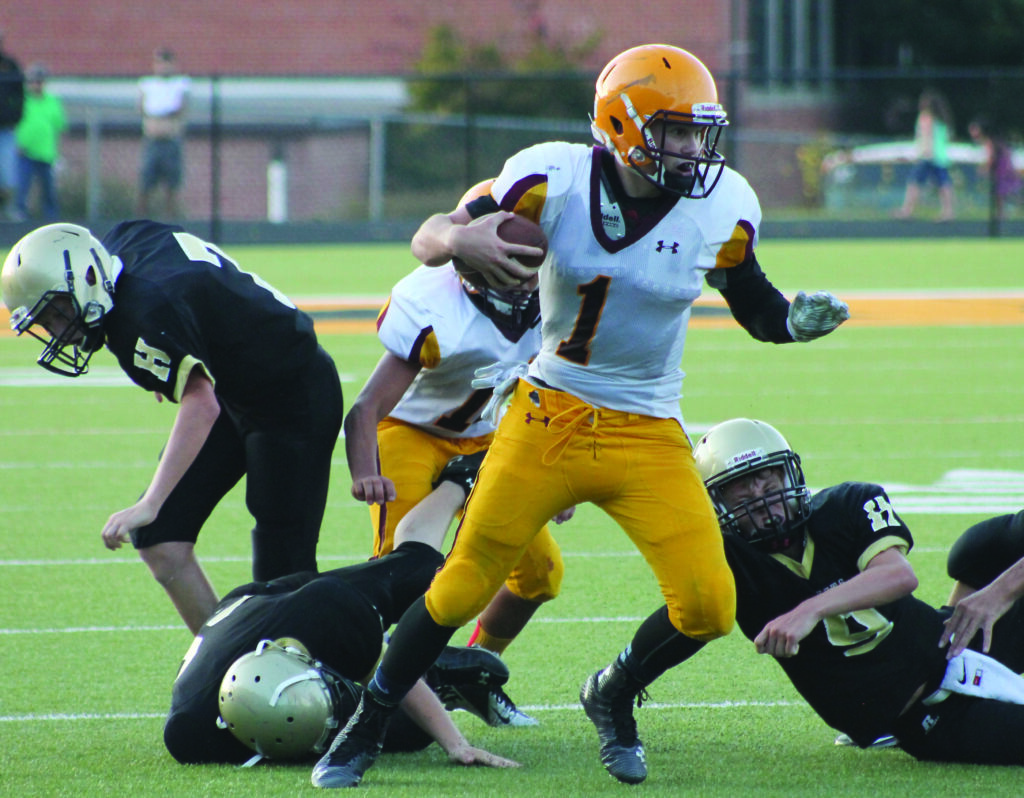 Tye Mintz (#1), JV Braves quarterback, breaks two tackles and reverses field en route to a 56-yard run all the way to the Hayesville 6-yard line in the third quarter. In all, Mintz broke four tackles on this run.

Evans followed that up with a successful run for the two-point conversion to make it 8-0 at the 8:16 mark of the first quarter.

Cherokee forced a punt on Hayesville’s next possession following a key sack by Evans on third down.  The Braves weren’t able to capitalize though as they fumbled the ball on their 34-yard line.

But, Hayesville decided to follow suit just a minute later and fumbled the ball back to the Braves with Cherokee recovering at the Hayesville 42.

Going into the second quarter, the Braves began to move the ball on the ground.  Then, out of the blue, Tye Mintz hit Wesley Wildcatt in stride for a 60-yard touchdown strike.  Tye Mintz connected with Holden Straughan for the two-point conversion, and Cherokee led 16-0 at the 7:44 mark in the second quarter.

Hayesville fumbled again, and the Braves recovered on their own 41 yard line, but their drive stalled and Cherokee took their 16-0 lead into the halftime.

The Braves came out firing again in the third quarter as Tye Mintz broke four tackles on a spectacular 56-yard run down to the Hayesville 6-yard line.  Several plays later, Damian Blanton connected with George Swayney on a 4-yard touchdown pass.  The two-point conversion failed and Cherokee led 22-0 at the 4:08 mark in the third.

Nate Evans (#6), JV Braves cornerback, breaks up a pass play in the end zone in the fourth quarter to secure Cherokee’s shutout on Thursday at Hayesville.

Hayesville’s next drive was stalled by another Evans sack, and the Yellow Jackets were forced to punt again.  But, they got the ball back just two minutes later on a Braves fumble at their own 38-yard line.

Hayesville drove the ball deep into Cherokee territory, but the Braves defense held tight and held onto their shutout.  Nate Evans broke up a key third down pass in the end zone, and a Hayesville wide receiver dropped a ball in the end zone on fourth down.

Cherokee took over on its own 9-yard line.

But, no worries, they just handed the ball off to Evans who took it 91 yards to the house on the first play of the drive.  The two-point conversion failed and Cherokee led 28-0 at the 8:27 mark.

Hayesville got the ball again, but Cherokee just wouldn’t allow them to drive the ball, and the game ended with Cherokee on top.

The JV Braves are off this upcoming week.  They play host to the Robbinsville Black Knights on Wednesday, Sept. 10 at 6pm.