VONORE, Tenn. – The Sequoyah Birthplace Museum, Tennessee’s only tribally owned museum, and Fort Loudoun State Historic Area are partnering for the Great Island Festival on Sept. 6-7 from 10am – 5pm each day.

At Sequoyah Birthplace Museum, visitors will have the opportunity to step back in time to experience Native American food, Cherokee arts and crafts demonstrations, music and dance. Special demonstrations and displays will include Cherokee life in 1700’s and a Civil War encampment and the Civil War battle re-enactment will be at 3pm. 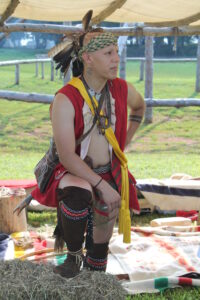 The 23rd Annual Fall Festival’s theme is “The Americanization Program of the Cherokee”.  Visitors will be able to meet and talk with Cherokees from the Cherokee Nation and the Eastern Band of Cherokee Indians.  Cherokee cooking demonstrations will be held in the newly reconstructed 1800’s dog-trot log cabin with Johnnie Sue Meyers.

Special entertainment will be provided by the Warrior Dancers of Anikituhwa,   and the Cherokee Historical Society will be performing a special program on the Trail of Tears.  One of this year’s highlights will be the Tennessee State Parks Birds of Prey program on both days.  Cherokee Storyteller Lloyd Arneach Sr. will be telling Cherokee stories on both days as well as selling his book and CDs.

The festival is named for the “Great Island”, a Cherokee village site 250 years ago.  Today, Fort Loudoun State Historic Area and the Sequoyah Birthplace Museum occupy an island created by the Tellico Lake Project.

Tickets are $5/each and children 12 and under are free.  Advance tickets are available at both locations.  A shuttle bus will be available between the museum and Fort Loudoun State Historic Area.