WAYNESVILLE – The scoreboard may not have reflected it at the end, but the Braves’ season opener against Tuscola at Waynesville Middle School on Friday, Aug. 22 was a success for Cherokee.  They played well and put together a nice fourth quarter comeback that fell just short as they lost 35-28.

Braves QB Brandon Buchanan gave Cherokee fans something to cheer about the entire game.  He accounted for 285 yards of total offense including 216 yards passing.  He ran for a 13-yard score in the second quarter and threw two touchdown passes in the fourth quarter.

Braves QB Brandon Buchanan carries the ball right up the middle for a 13-yard touchdown in the second quarter of Friday’s game against Tuscola at Waynesville Middle School. Buchanan accounted for 285 yards of total offense for Cherokee including 216 yards in the air. (SCOTT MCKIE B.P./One Feather photos)

The game began with two Tuscola scores in the first quarter including a 2-yard run by Parker Allen and a 52-yard touchdown pass from Allen to Nathan Messer.  The Mountaineers led 14-0 going into the second quarter.

Only five seconds into the second quarter, Buchanan got the Braves on the board with a gutsy, right-up-the-middle 13-yard run.  The two-point conversion failed and Cherokee trailed 14-6 at the 11:55 mark.

Four minutes later, Tuscola would answer as tough-running Houston McCracken broke several tackles and refused to go down en route to a 30-yard score to put Tuscola ahead 21-6.  McCracken carried the ball 18 times for 130 yards.

Cherokee kept grinding and Braves tailback J.J. Benjamin found the endzone on an impressive 17-yard run with only 1:19 left in the half.  Benjamin carried the ball 6 times for 33 yards.

The two-point conversion was good and Tuscola led 21-14 at the half. 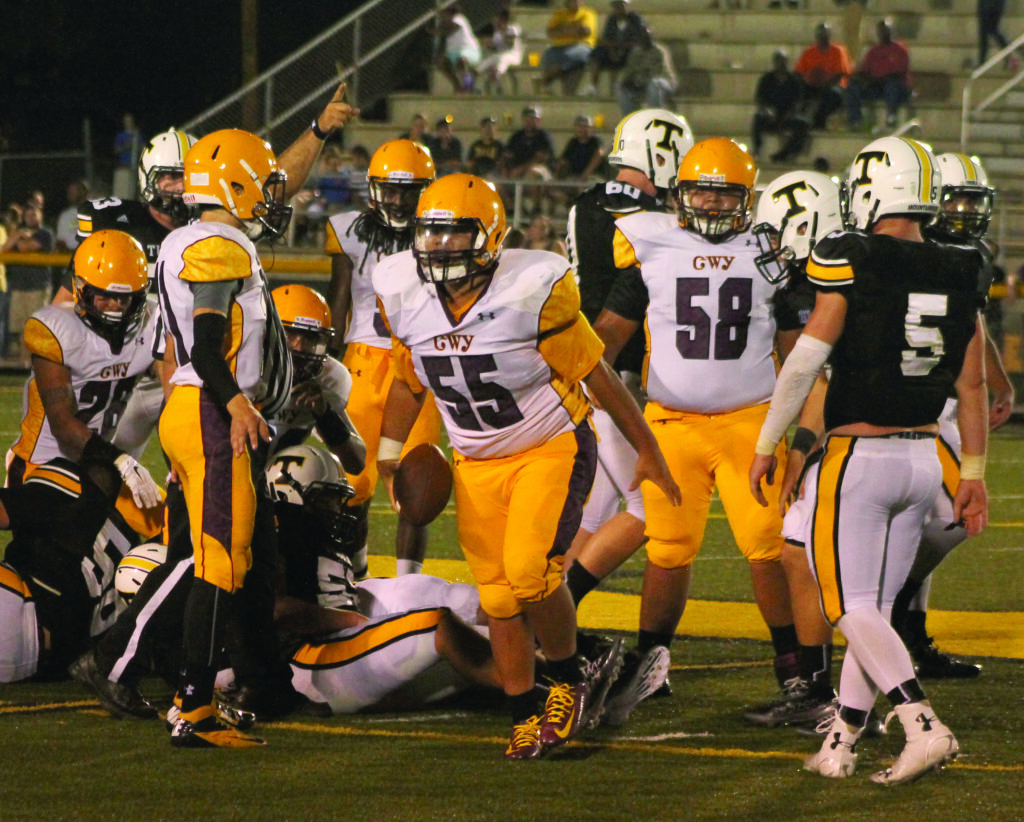 Will Davis celebrates after recovering a Tuscola fumble in the third quarter. He recovered another fumble in the first quarter and had 11 tackles in the game.

The third quarter went back and forth, but Tuscola managed to get one score as Allen took it in from one yard out to make it 28-14 going into the fourth quarter.

Then, just 10 seconds into the final quarter, Tuscola put what they thought was the nail in the coffin as Damon McDaniels caught a pass on the run from Allen and took it 82 yards to the house to make it 35-14 at the 11:50 mark.

But, Cherokee was far, far from being finished.

The Braves moved the ball down the field quickly following the ensuing kickoff and Benjamin caught a Buchanan pass on a 17-yard scoring play at the 10:45 mark.  The two-point conversion was good, and Cherokee cut into the lead making it 35-22.

Following a Tuscola fumble, Cherokee drove back down the field and Buchanan connected with Jason McMillan on a 15-yard touchdown pass with 5:57 left.

Cherokee got the ball back one more time, but their drive failed just short of the endzone and the game ended with Tuscola on top 35-28.

The Braves will take on the Mountaineers again this week, but it will be the Mitchell Mountaineers at Ray Kinsland Stadium on Friday, Aug. 29 at 7:30pm.