In a scrimmage game this past week, Braves running back J.J. Benjamin dropped his shoulder to the right, stutter-stepped to the left and completely faked out a Gatlinburg-Pittman linebacker to the point he had to turn around to see what was going on. 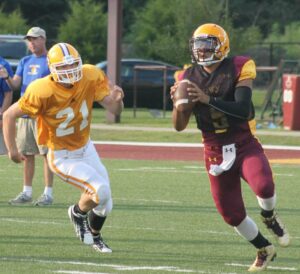 Braves quarterback Brandon Buchanan avoids pressure to get a pass off in a scrimmage game at home against Gatlinburg-Pittman on Thursday, Aug. 14. (SCOTT MCKIE B.P./One Feather photos)

Those are not fluke plays.  These are the kinds of plays Braves fans can expect to see all season long.

“We just have to get better each week, and at some point, if we stay the course, I think we can be something that we all can be proud of.”

Briggs, who formerly was head coach at Western Carolina University, praised all of the players and said there is a lot of talent on this year’s squad.

Briggs said Dustin Johnson, a senior basketball standout, is playing on the gridiron this fall as a wide receiver.  “His athletic ability is really showing on the football field, and I’ve been really impressed with his toughness.”

Briggs related that Channing Lossiah and Darius Blanton have also been impressive at the receiver position. 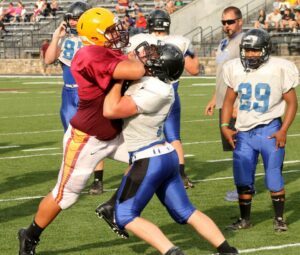 “At running back, Lloyd Mitchell has done a really nice job, and we have a new player, J.J. Benjamin, that I feel like is an excellent running back as well as a defensive back so we expect him to do some fine things out there.”

On the defensive side, Briggs said Justin Brady will be a key up front.  “Justin will be a really tough person to block, and I’ve been really impressed with his work ethic this spring and this pre-season.”

In talking about offensive schemes, Briggs commented, “We’ll do whatever we can to move the ball.  We are going to throw the football because we can.  We’ve got to get better at protecting.”

He said it might take several games to get the pass protection to the point where it should be, “but we’re going to continue to work on that.”

This year’s JV Braves team has some returning talent, and they’re also looking at a very successful year.

“I think we’re going to be pretty good,” said JV head coach Chris Mintz.  “We’re just now getting a lot of kids out so we’re finally getting our numbers up.  If we stay injury-free, I think we’ll do pretty good.”

When asked which players fans should watch for this year, he related, “I think Tye (Mintz) and Isaiah (Evans) are both going to be really, really good.  We have some great skill kids.  Holden Straughan and George Swayney are both back from last year where they caught a lot of balls, and they’re going to be pretty good at those positions.”