Sen. Kay Hagan (D-NC) visited Cherokee on Wednesday, Aug. 6 and met with tribal leaders while touring sites around the reservation.

“I took a tour of the Casino which was impressive, had an incredible lunch and met a lot of people, a lot of workers,” said Sen. Hagan.  “We had a lot of discussion about the new casino going up in Murphy and just about the economic opportunities that it affords, not just with jobs, but also with the investment back into the community.”

Sen. Hagan praised the Tribe for putting money into education, child care, and other essential programs.  “That is what’s building the Cherokee nation.  It is very important.  To me, it’s all about education and that early education to ensure that the children learn and are in a safe environment and are able to be very productive Cherokees.”

She added, “We’ve also been talking about the school and the Big Cove Road issue as well as the National Park Service and the ruling that will come out soon about the ramp gathering.”

Chief Hicks commented, “We’re obviously very glad that she’s here, but I think that the thing we wanted to show today was the progress that the Tribe has made especially with the services that we’re providing.”

He said it was nice to be able to show Sen. Hagan the new school, the Kituwah Academy, and the progress being made on the construction of the new hospital.  “It’s easy to talk about something, but it’s more meaningful if you can talk and see it at the same time.  We can make a lot more progress that way.” 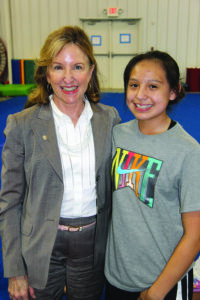 “She’s aware of a lot of the major initiatives now, and as she goes back to D.C. she can think about some of the things that we’re doing and maybe help us in more ways than even we thought about.  I definitely think the visit has helped our relationship.”

Vice Chief Blythe related, “She’s been able to spend almost an entire day with us today.  We just want to continue to show what we’re doing here with the Tribe, and some of the things that she’s voted on help us and impact the services that we’re able to provide for our people.”

He said key votes on legislation such as the Affordable Care Act and the Violence Against Women Act (VAWA) have been “very beneficial”.

“She’s taken some tough votes and some tough hits, but as I told the Council, she’s my Senator and I support her.  Getting her here today is good for the Tribe.  It’s a good way for us to put our best foot forward…it’s just part of good governance and keeping up good relationships.”