CULLOWHEE – Results from an online poll have been tallied, and Western Carolina University has been announced as the No. 1 college for outdoor adventure in the Southeast and Mid-Atlantic by a leading outdoors magazine.

Western Carolina captured the title of “top adventure college” over the second-place school, Garrett College in Maryland, following several rounds of voting in which WCU also came out on top against Emory University, the University of Tennessee-Knoxville, Virginia Tech and Appalachian State. Representatives of Blue Ridge Outdoors magazine said that more than 115,000 visitors to its website cast votes during the competition held earlier this summer, and results are listed in the publication’s new August issue. 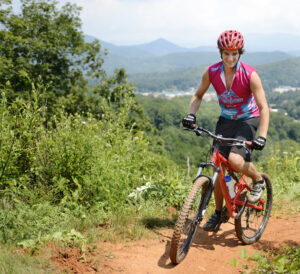 In her story about the poll results, magazine staff member Jess Daddio wrote that “WCU’s stunning campus is home to some serious adventure. Both the Parks and Recreation Management (PRM) department and the Base Camp Cullowhee outing program offer students a chance to get the quintessential experiential education experience.”

Base Camp Cullowhee has long offered dozens of outdoor recreation trips for students and equipment rental, but in recent years the staff has increased its experiential education services to integrate outdoor activities with students’ classroom curriculum, said Josh Whitmore, WCU’s associate director of outdoor programs. “For example, a professor might approach us about including a climbing wall session, a group development team-building activity or a guided hike to a geologic feature in a class,” Whitmore said.

When it comes to total student participation in Base Camp’s programming, numbers have skyrocketed in the last decade, Whitmore said. “When I first started here nearly 10 years ago, we would run about 300 to 400 touches (student participations) for a year, and we have about 7,000 to 8,000 now,” he said. The growth has followed along with improvements in the university’s recreational facilities, such as the indoor climbing wall at the Campus Recreation Center, which sometimes averages up to 800 student visits per month, he said. Also, WCU’s on-campus trail system – with seven miles of pathway for mountain biking, hiking and running – opened last year.

A decade ago, the Base Camp staff included Whitmore and about half a dozen student workers, but now it takes three full-time staffers and 20 to 25 students to keep the outdoor program going, he said.

Accordingly, the university’s reputation among the general public and prospective students as an epicenter of outdoor adventure has grown over the years, Whitmore said. “Certainly, the mountain lifestyle is a big draw for folks. This (“top adventure college” title) is a big part of building that reputation and will help with that for sure.”

In its rundown of the top eight vote-getting schools, the magazine also included profiles of two accomplished alumni from each institution. WCU’s featured students, both graduates of the Parks and Recreation Management Program, are Glenville native Bobby Bryson and Laurinburg native William Butler. Bryson is now a captain for the Charlotte Fire Department, and as a member of the North Carolina Helicopter and Aquatic Rescue Team, takes part in search and rescue operations that utilize Blackhawk helicopters for swift-water, flood, urban and wilderness rescue. Butler is an educational technician for Great Smoky Mountains National Park, and in that position he introduces visitors to outdoor adventure and educates them about using the wilderness responsibly.

In addition to parks and recreation management, other academic programs offered by WCU for students interested in careers in the outdoors are forest resources, hospitality and tourism and natural resource conservation and management.